The Alouette K-Car from Eureka Miniatures has been designed for use with Eureka's 28mm Bush Wars figures and is scaled at 1/52. I have been asked why Eureka chose this scale and it is simply because 1/52 is the half-way point between 1/56 and 1/48 scales - the most common scales for vehicles and aircraft used by wargamers with 28mm miniatures.

The helicopter itself has been mastered by Uncle Les while  I have sculpted the figures and weapon system. From the beginning we had decided to opt for a clear canopy which, though making construction a little more complicated, we felt was the only way to represent the helicopter in this scale.

I have taken a series of photos throughout the build process and while I have not photographed every step they are intended to show what's involved in the completion of this model. Modellers may need to to try out some techniques that are new to them to complete their Alouette but the result is a most impressive model.

Nic has informed me that Eureka are currently out of stock of both the K-Car and G-car Alouettes. I know that many of these kits have been shipped to guys through Eureka's 100 Club and my intention is that these photos will be a help to anyone starting the model. The kit itself also comes with an excellent set of printed instructions put together by Uncle Les.

Please note that I have replaced the rotors that come with the kit with some clear acetate. All secrets will be explained below! 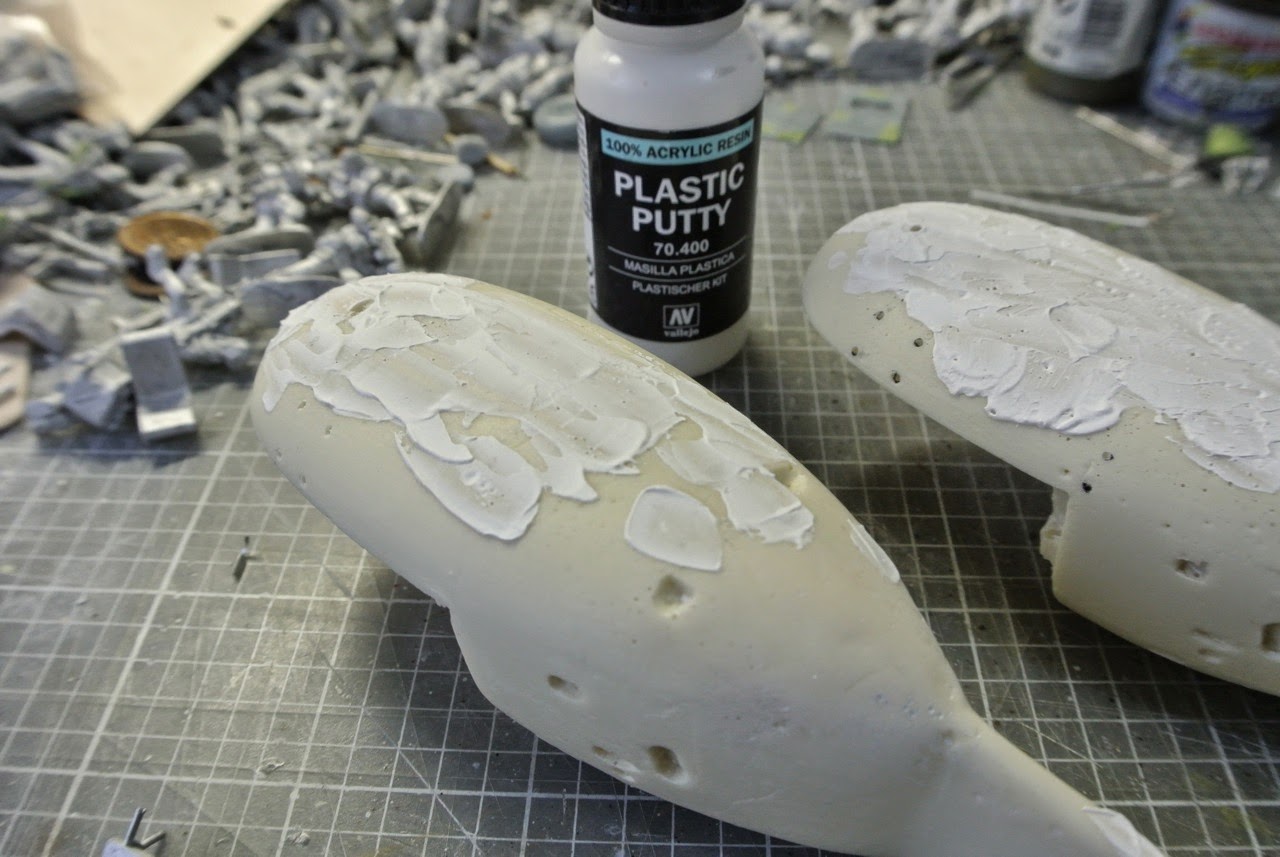 The major pieces will have resin casting blocks which will need to be removed. In the above photo the casting blocks have been removed and  putty is being used to fill in some air bubbles in the underside. 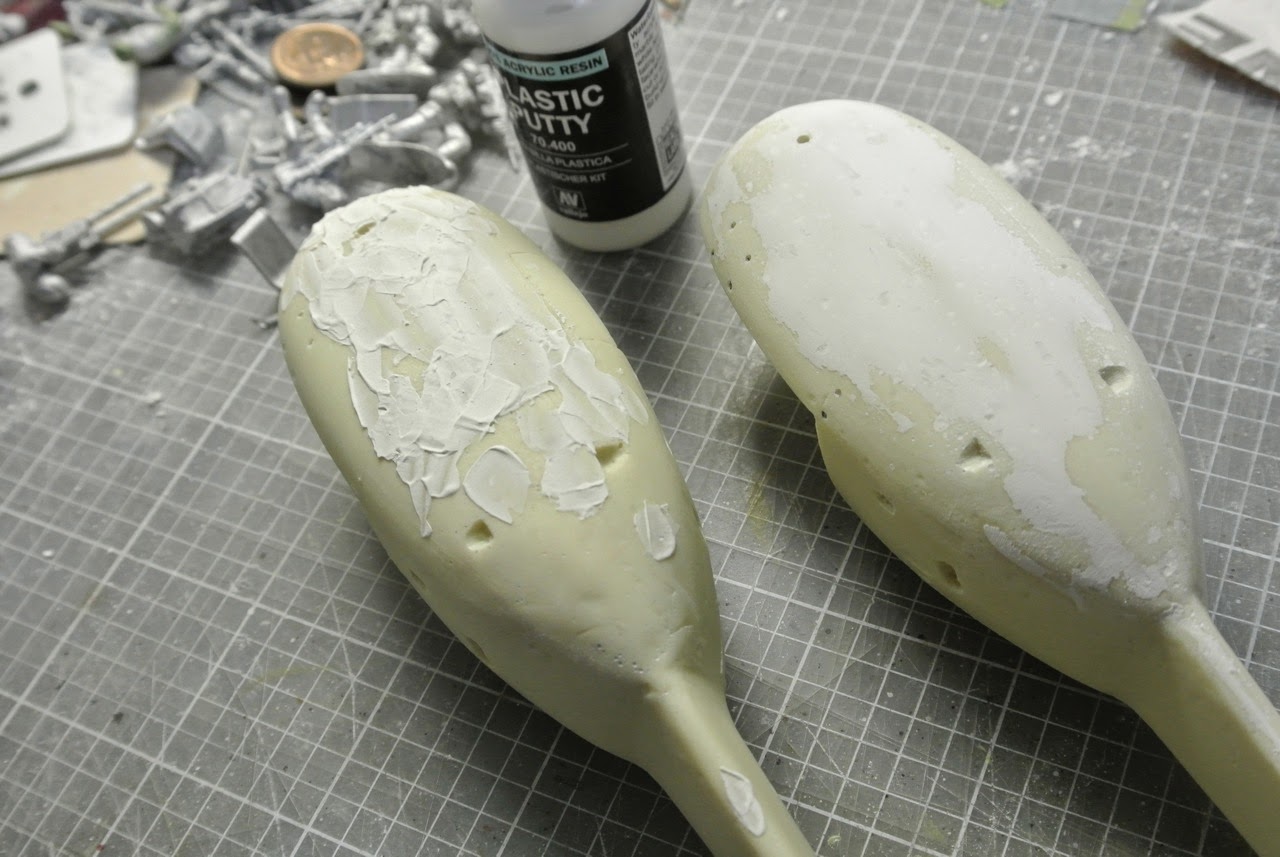 Here are two undersides, the putty on the one on the right has been sanded smooth with sandpaper. Take care not to fill in the locating holes for the steps. The K-car has a small step on each side. 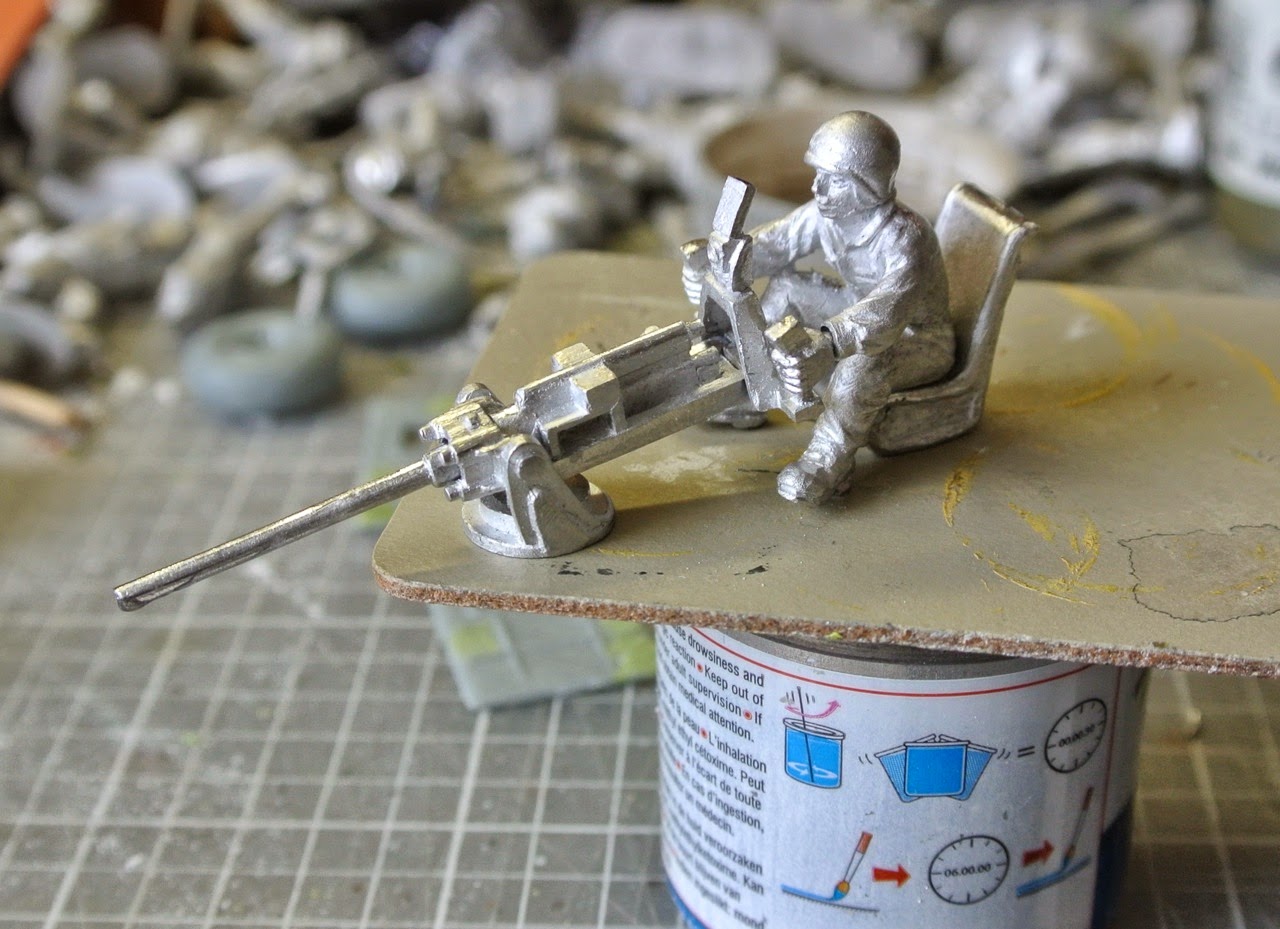 Construct the gunner and his 20mm cannon next, as seen above. Leave off the ammo feed as this is best glued into the cannon once final placement in the helicopter has been ascertained. 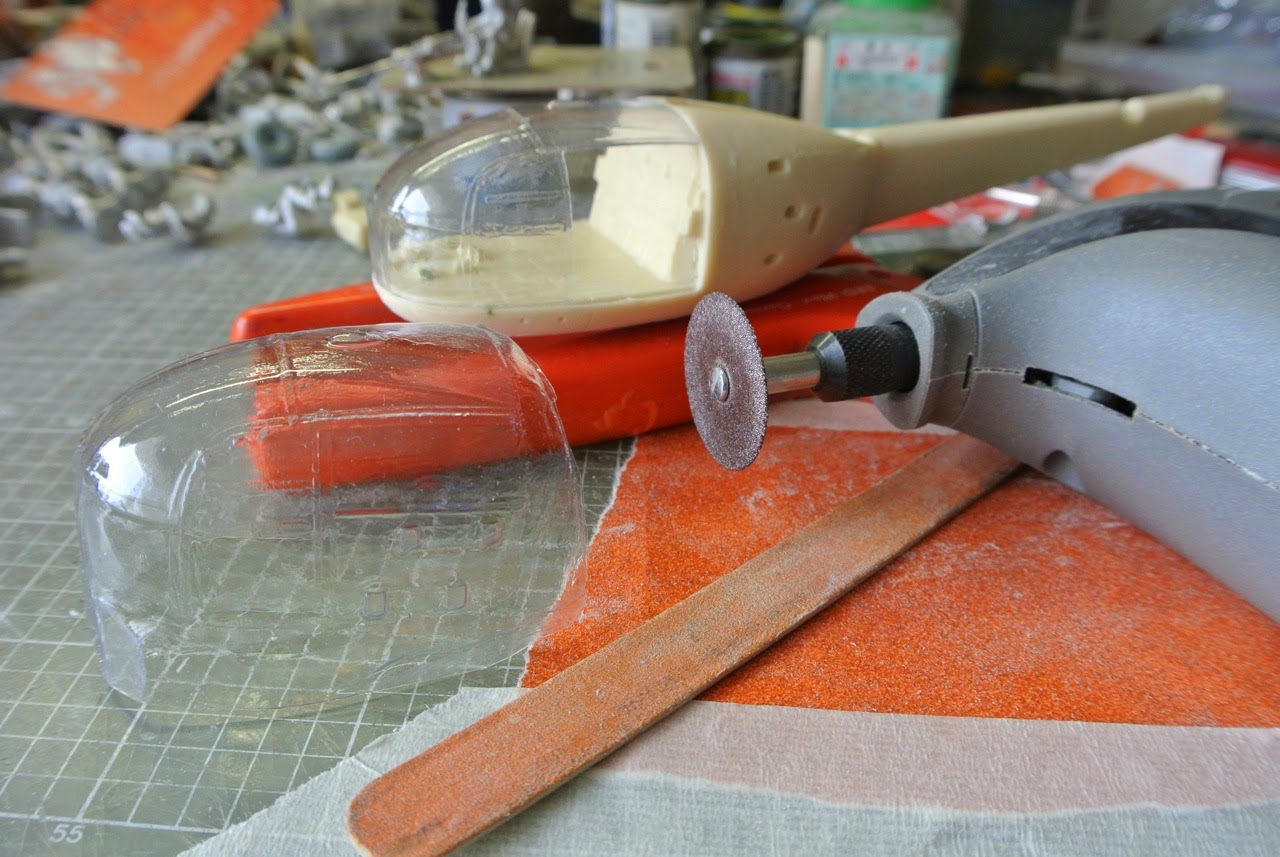 The vac-formed canopy is excellent and will fit very snugly, but first the excess plastic must be trimmed and sanded. If you have not tackled a vac-formed canopy before, the trick is to remove the bulk of the excess plastic with a small set of scissors. After that you can sand off the rest, checking for fit regularly. I used a small cutting disk in a Dremel rather than scissors to cut off the excess clear plastic then sanded on a piece of sand paper layed flat on the workbench. 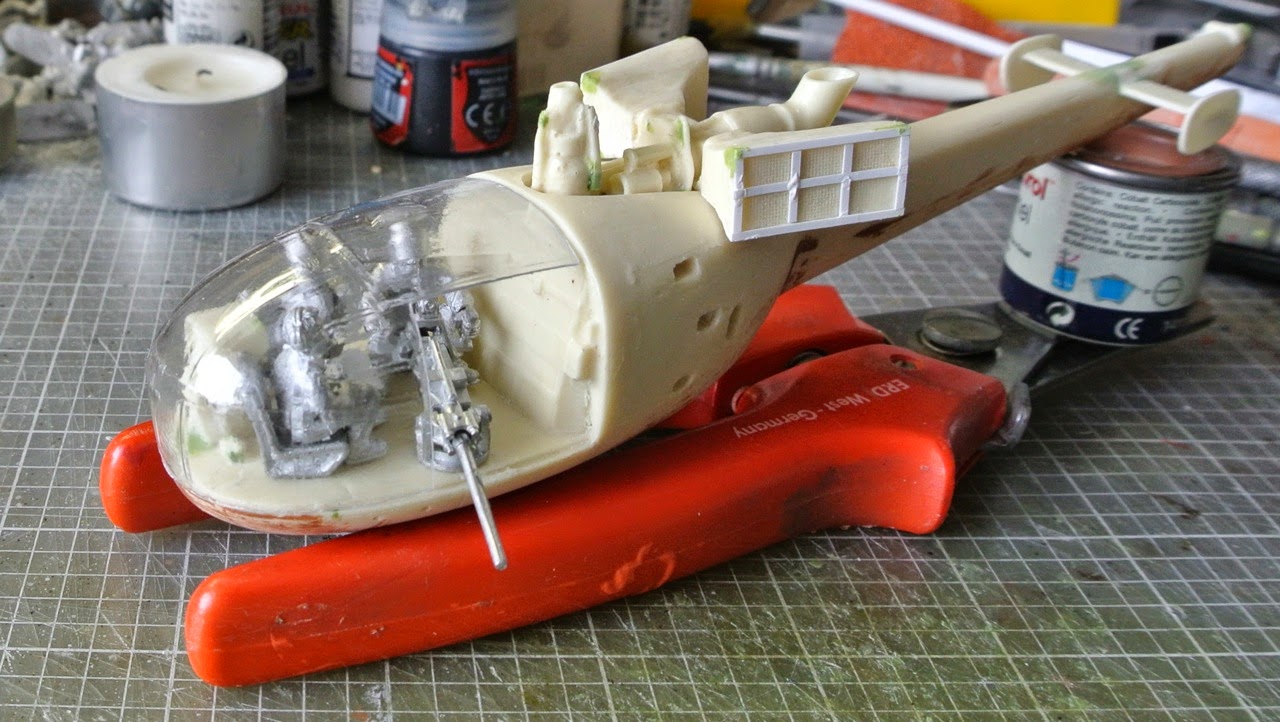 Once the canopy trimmed and sanded to shape the passengers and seats can be test-fitted. The pilot sits on the right-hand side. Next to him, but facing the rear and on an angle, is the K-car commander. In the back is the gunner and 20mm cannon. The centre console is between the pilot and commander. 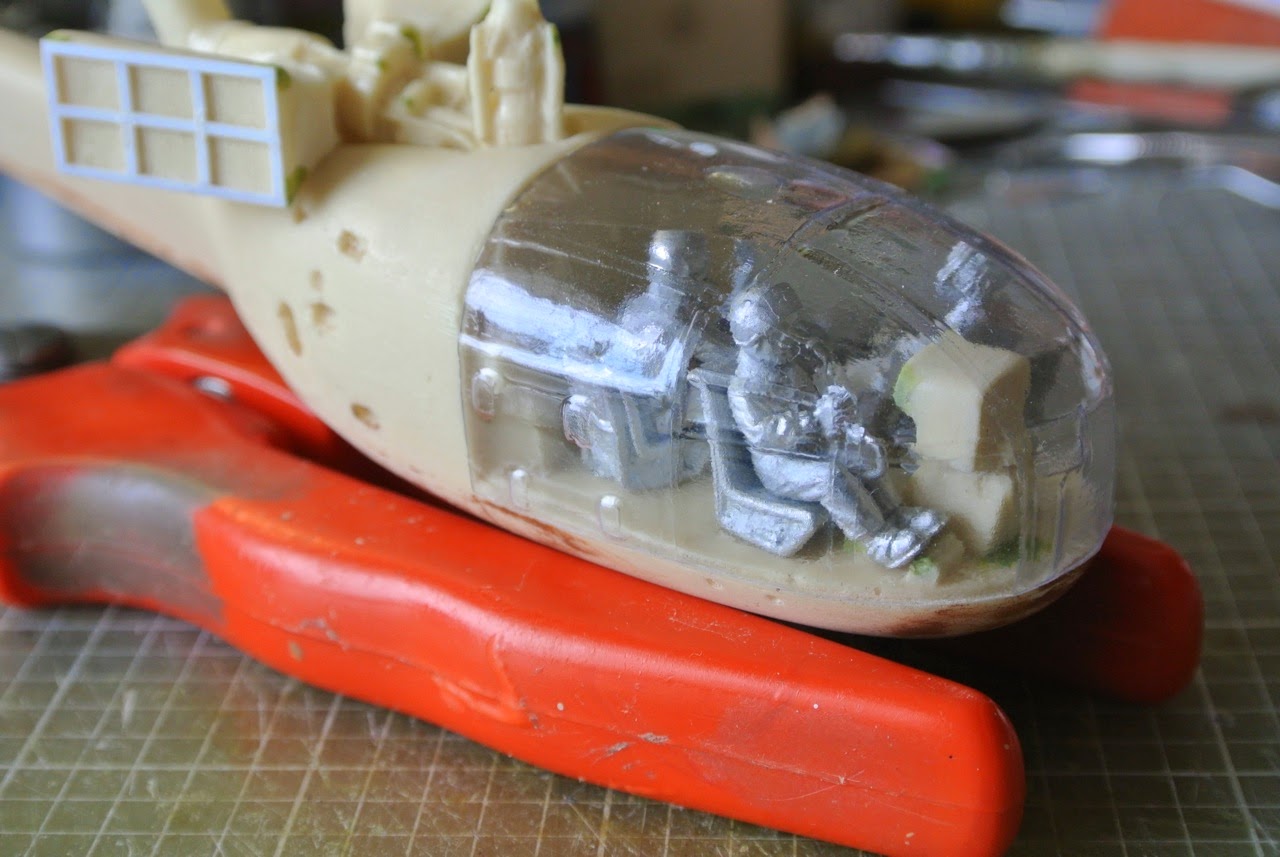 It's important to make sure that passengers and console fit and to not foul the top of the canopy, so check carefully that the canopy sits properly. You may need to sand the bottom of the centre console so that it is not too tall. 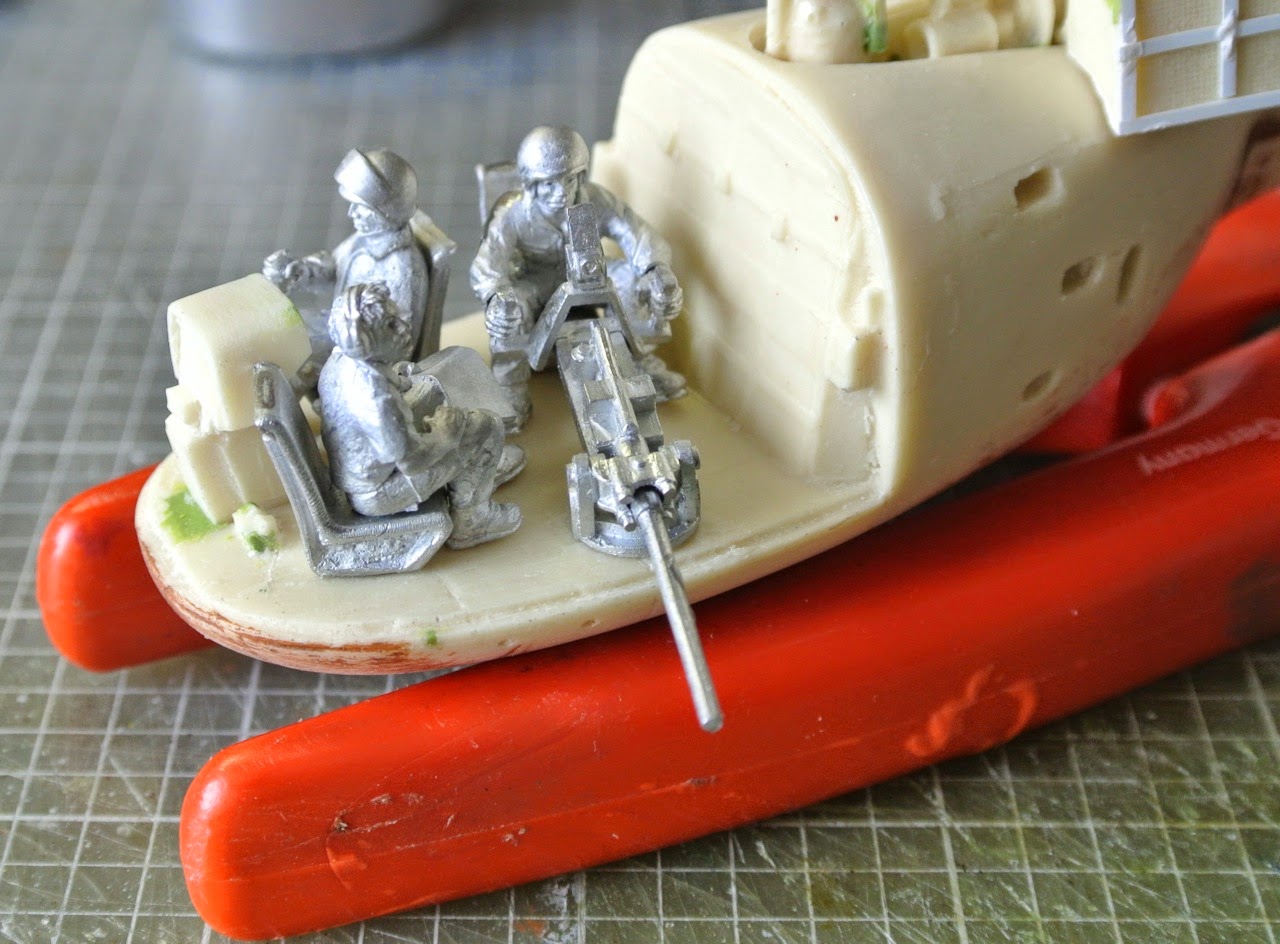 Here you can see the placement of the passengers. 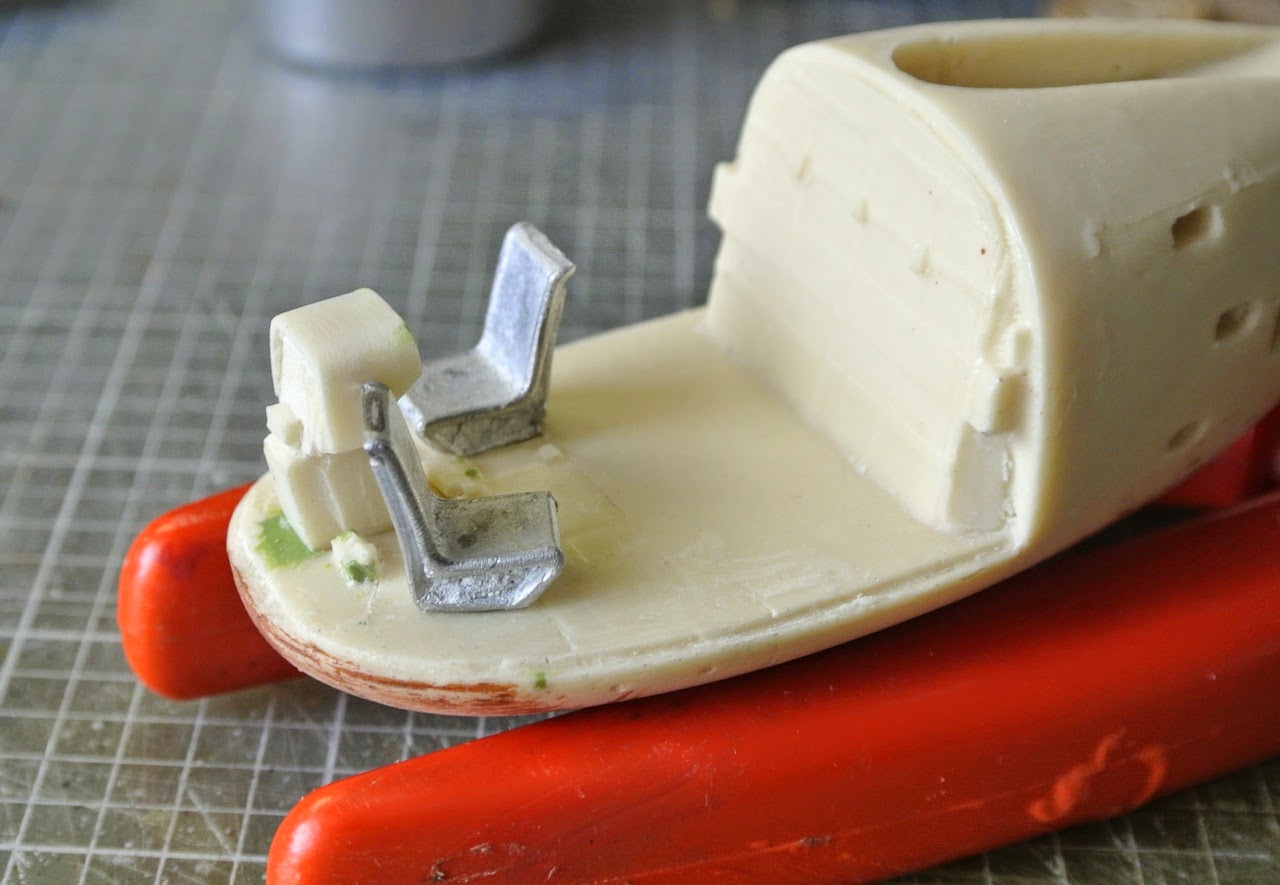 ....and here the pilot and commander's seats have been glued into place, along with the centre console.
At this point the interior can be painted a dark grey. Also note how I use the handles of my tin-snips as a simple platform to keep the model level while checking everything. 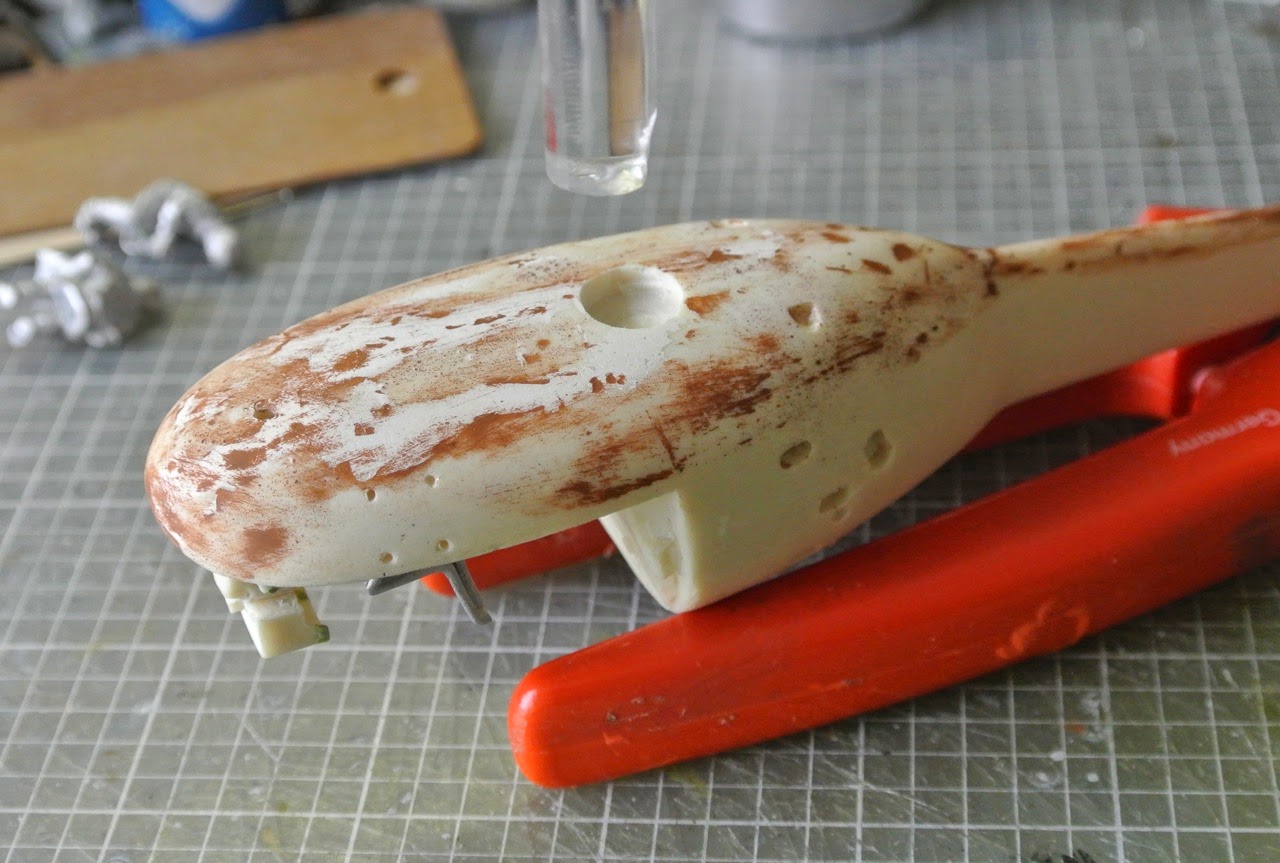 In order to fit the model onto a flight stand, a hole must be drilled into the bottom of the fuselage. Please  note that a fight stand is not provided with the kit. I'm using perspex rod for the flight stand, here checking that the hole I've bored is the right size. The point of balance is just aft of the crew compartment but remember to check this with passenger figures and cannon tacked into place, since they are cast in white metal and thus relatively heavy. 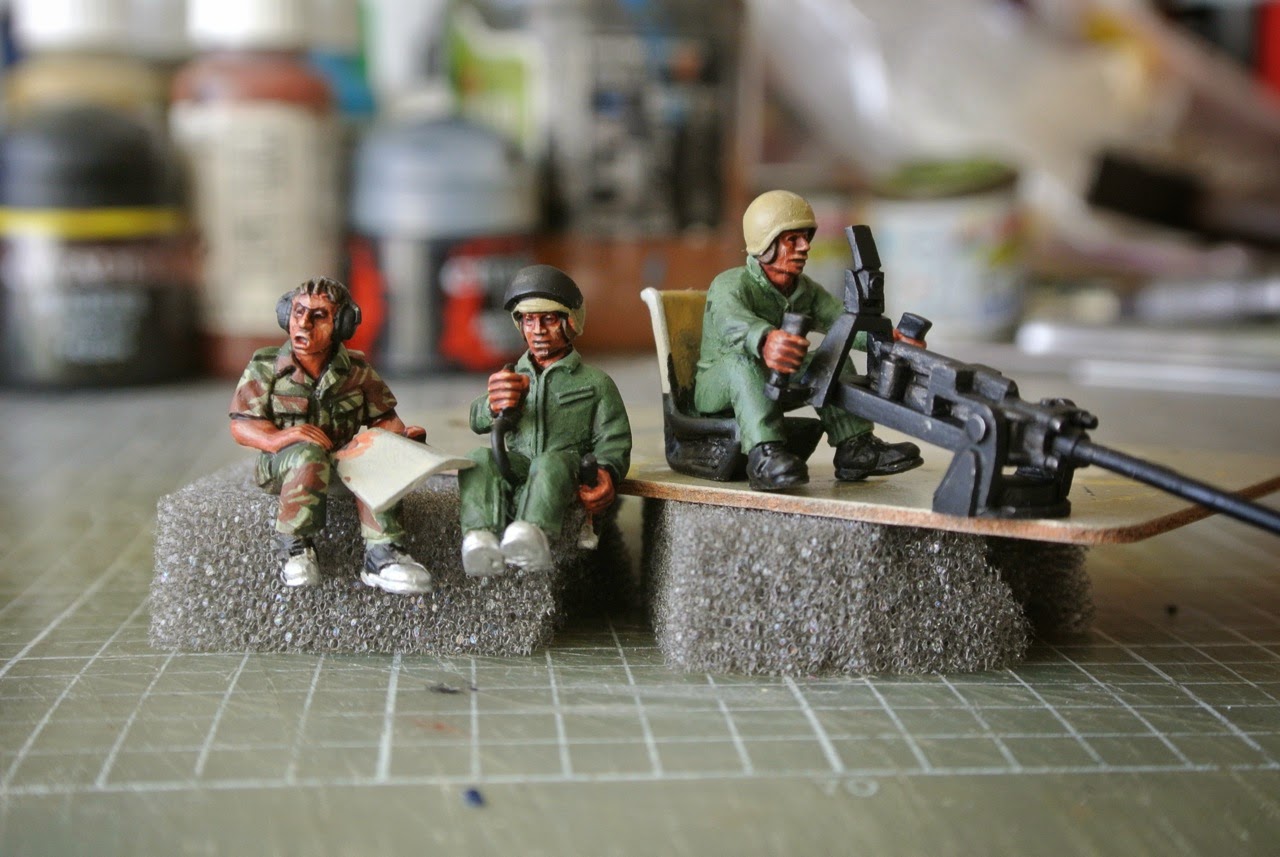 The passengers are painted in preparation for final placement. It can be seen that the gunner is already glued onto his seat. Gunner, cannon, and gunner's seat are much easier to place in this way. 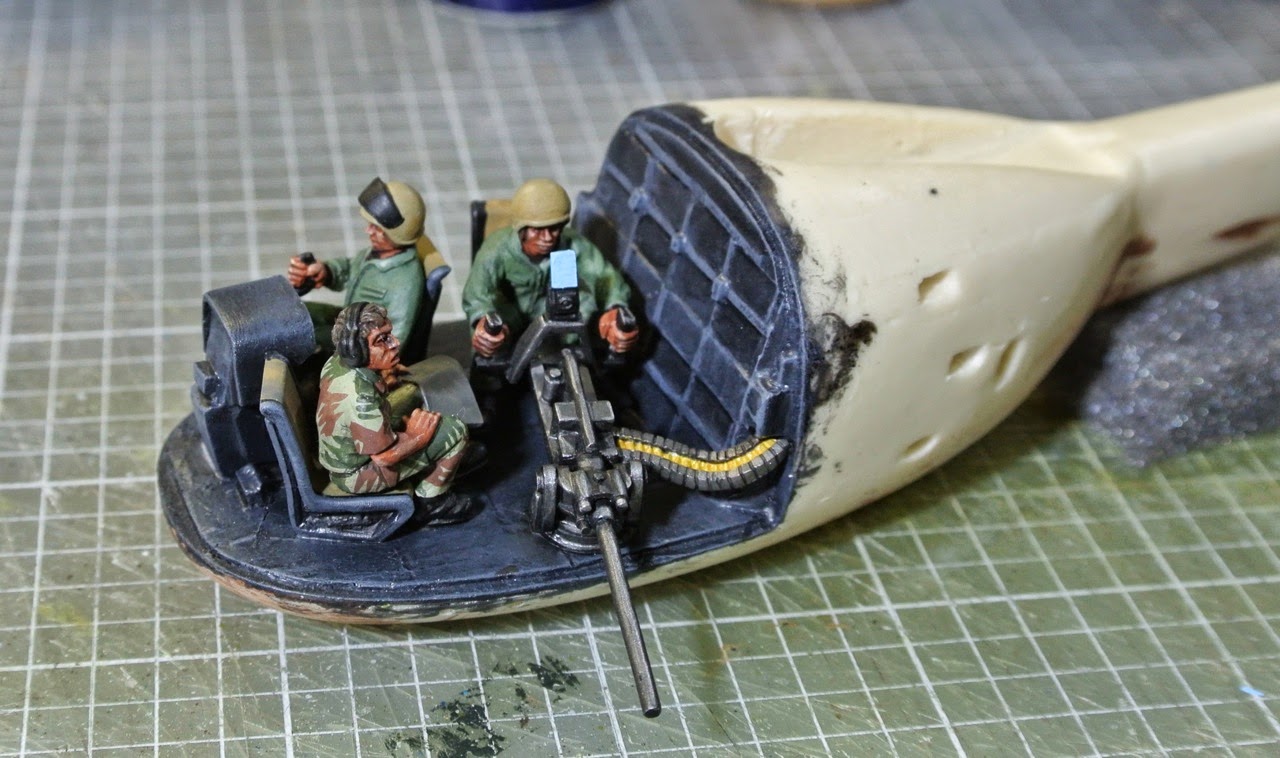 I used a 5 minute epoxy to glue the passengers in place. This gives plenty of time to fit the ammo feed into the left side of the cannon and tack the other end into the firewall with some super glue. 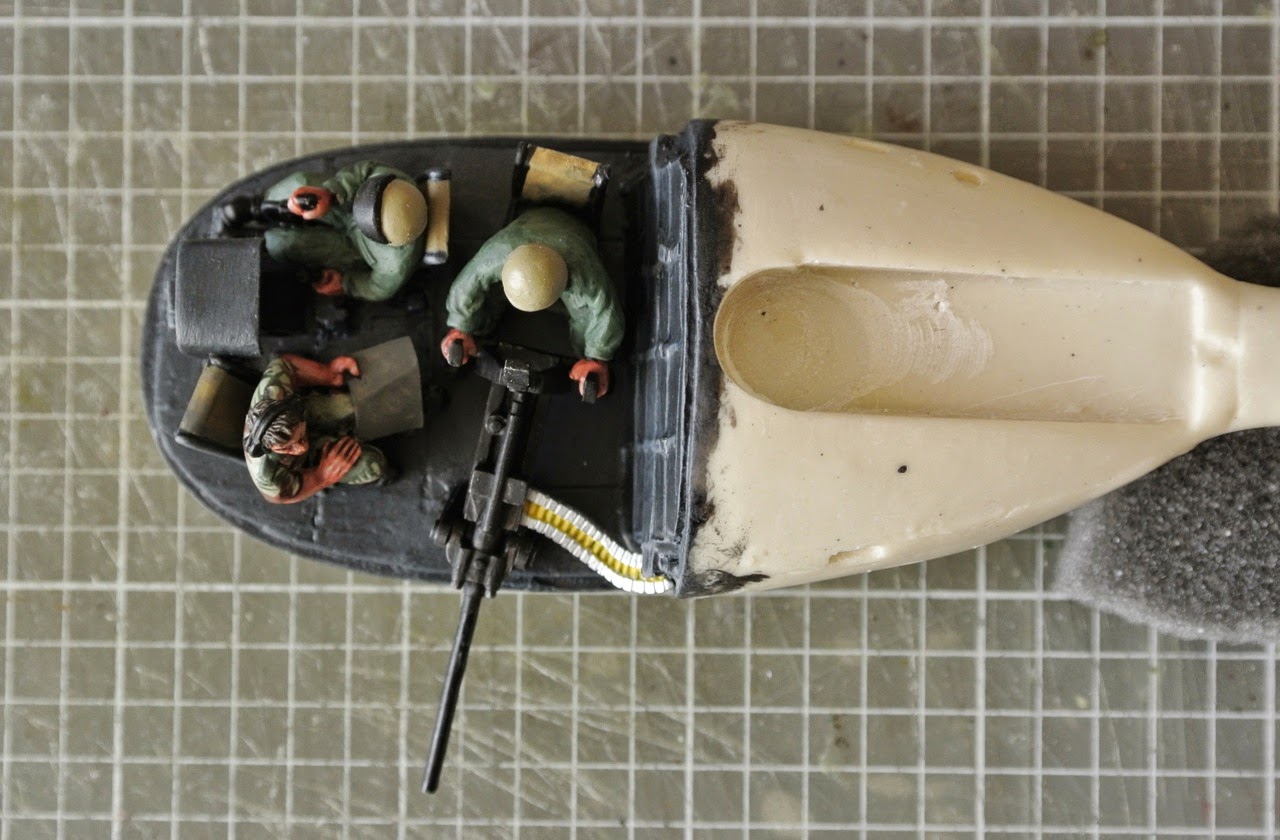 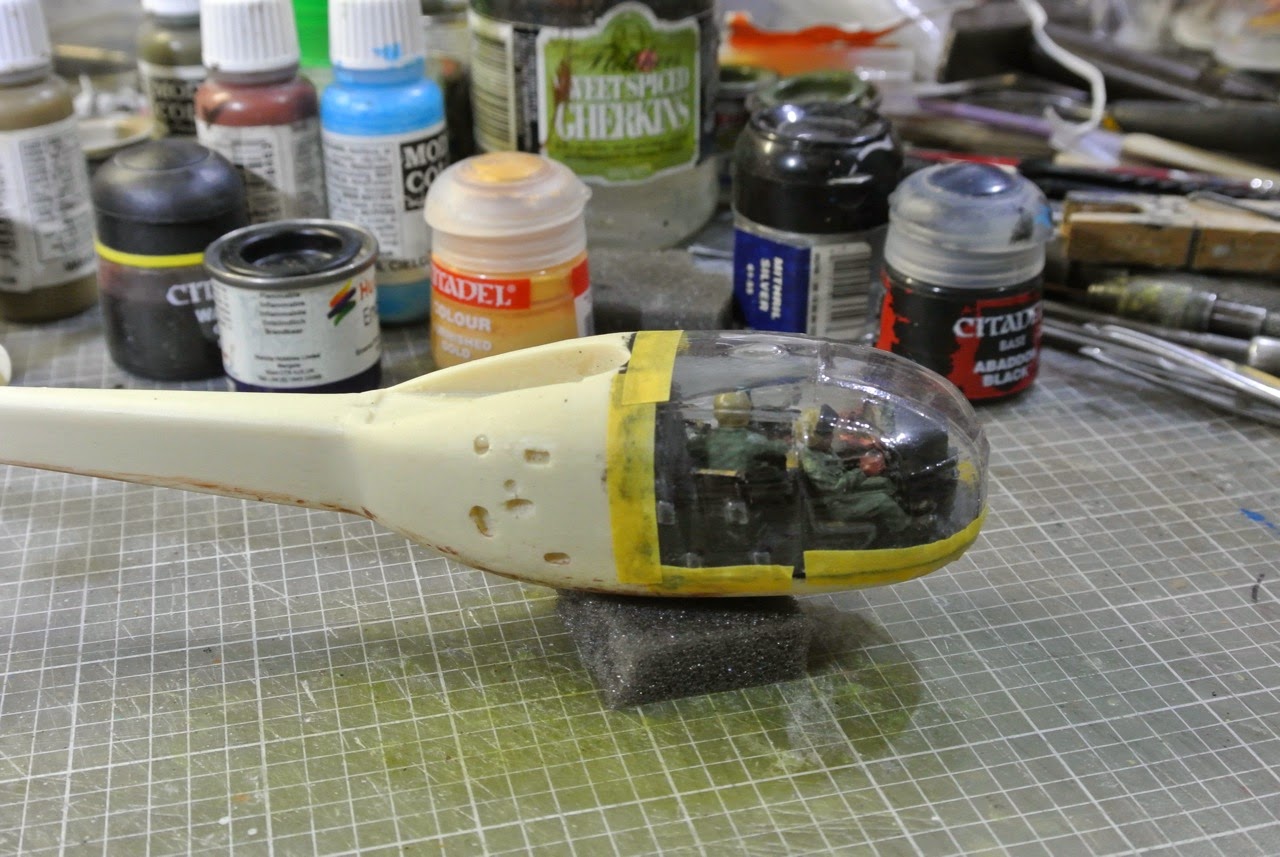 Once all that's done the canopy is glued into place. Again, I used Araldite (5 minute epoxy) for this, gluing on one half at a time. Alternatively, the fit of the canopy is snug enough to use white glue for this purpose. Do not use super glue as the fumes that come off it as it dries can fog clear plastic. 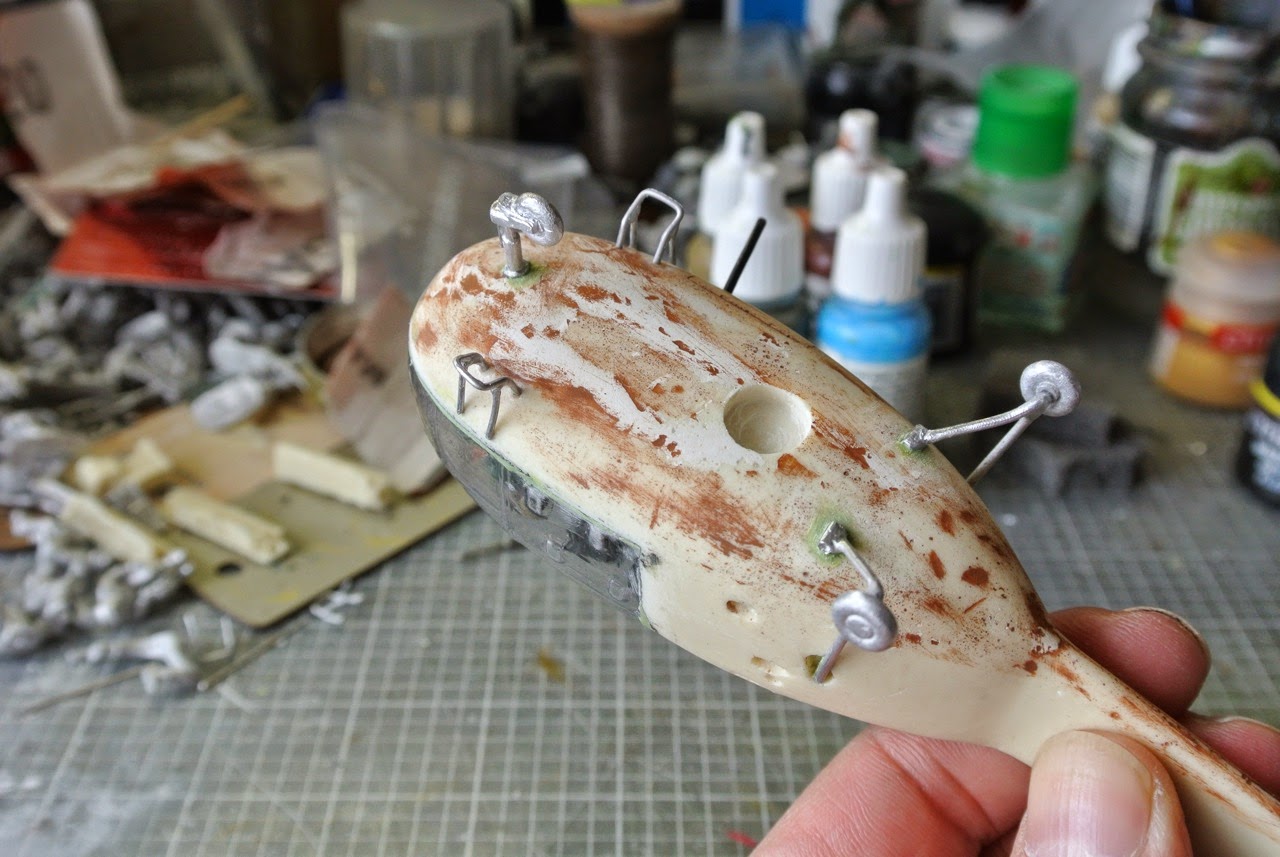 Access steps, wheel-struts and wheels are glued in place. 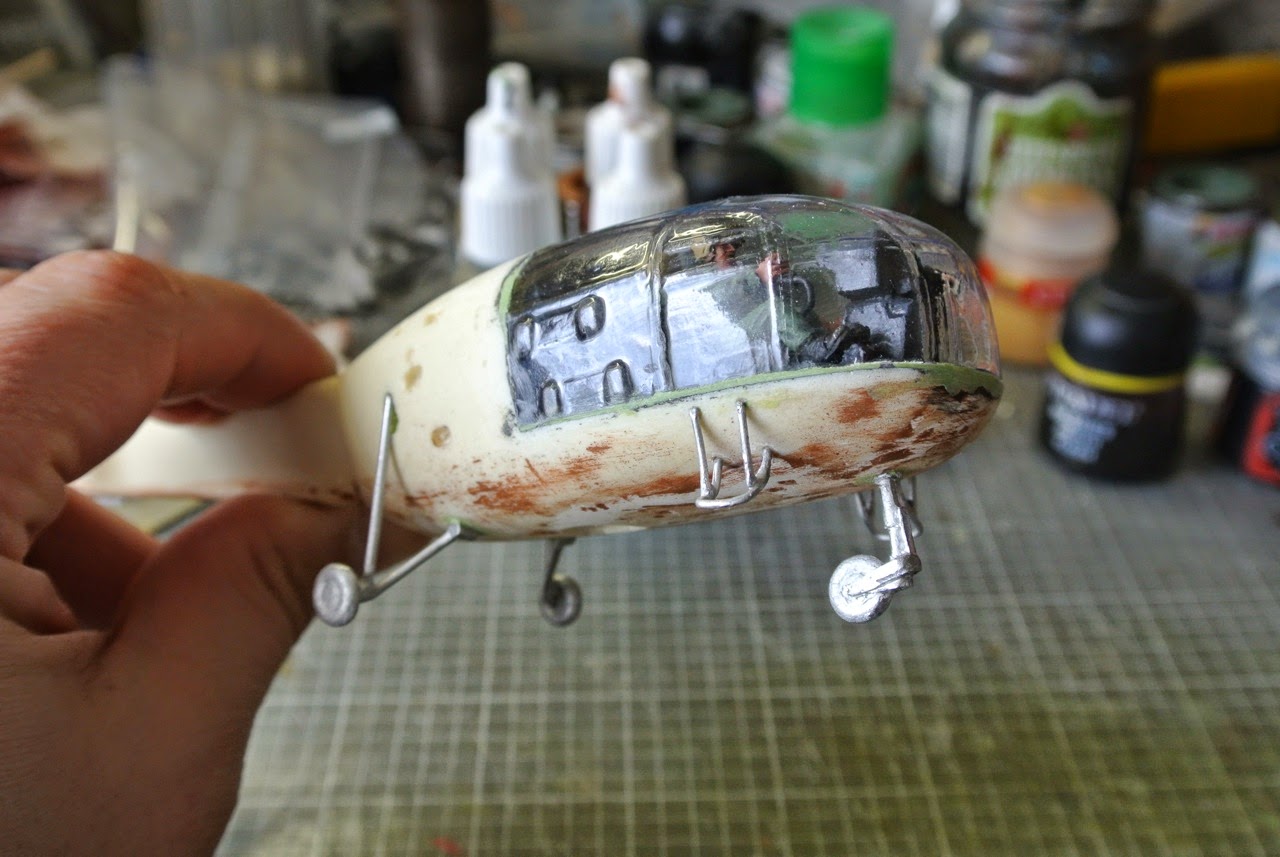 Any small gaps need to be filled at this point. I used some putty under the nose and around the wheel-struts to impart some extra strength. 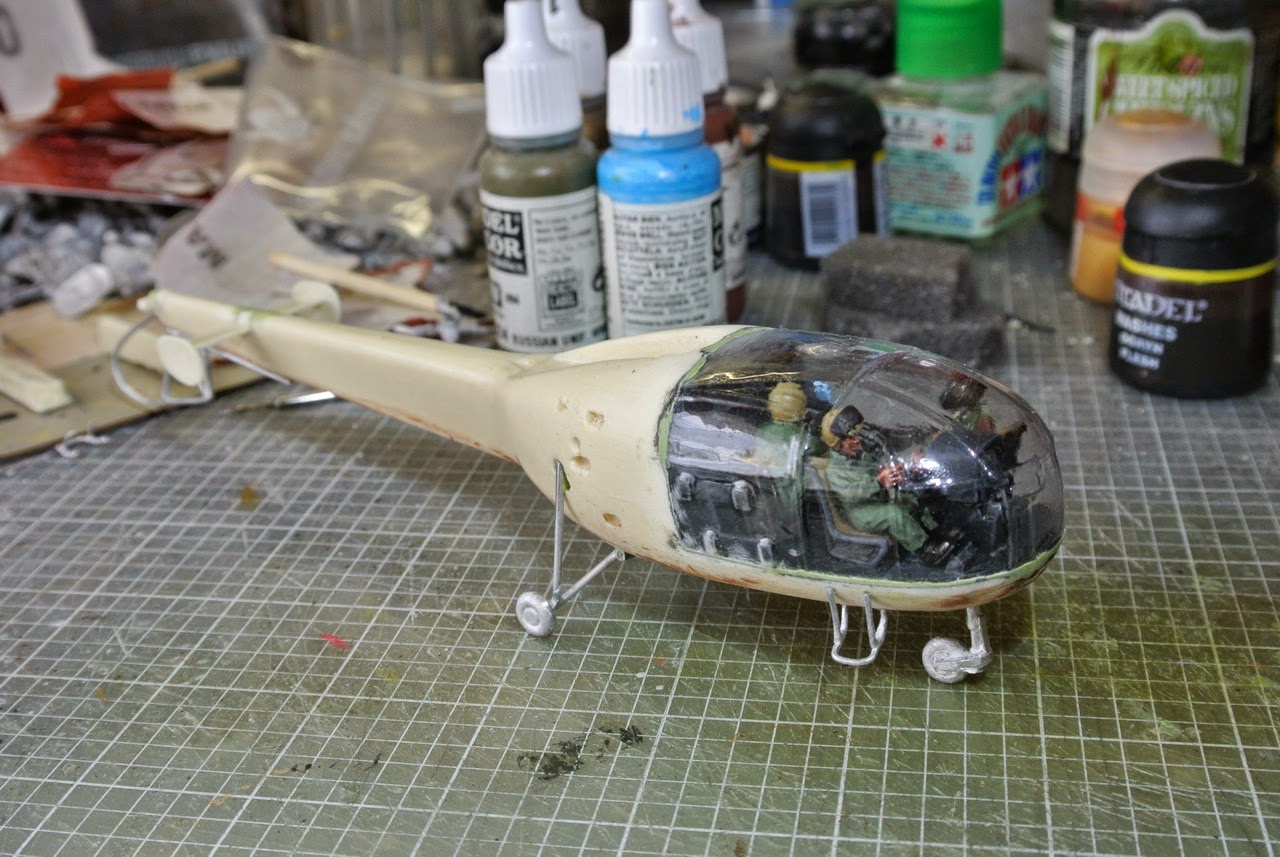 The model will stand on it's wheels, but since mine will end up on a flight stand the undercarriage strength is not critical. Tail skid and engine parts are to be sorted at this stage. I have left the engine off for painting. 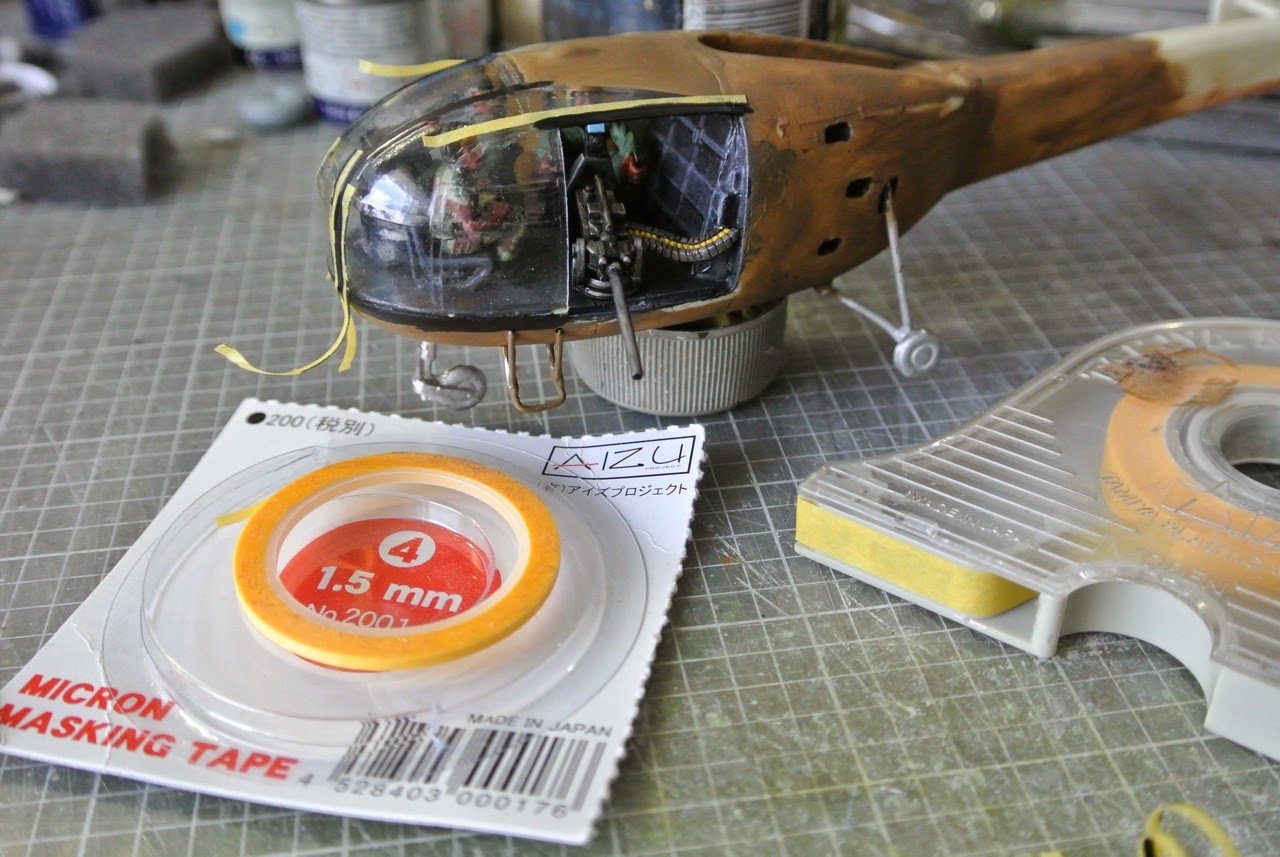 Painting begins with the canopy. Canopy frames were masked and painted black ( I used a Games Workshop acrylic for this). This is time consuming but the end result is much neater than painting them freehand. Masking tapes available from hobby shops have excellent adhesion and flexibility and will be much easier to use that household masking tape. Once the black was all done I freehand painted the brown base colour in a thin line in the centre of each canopy frame - it sounds harder than it is and gives a nice result. Overall colour I used was Humbrol 29 Dark Earth. 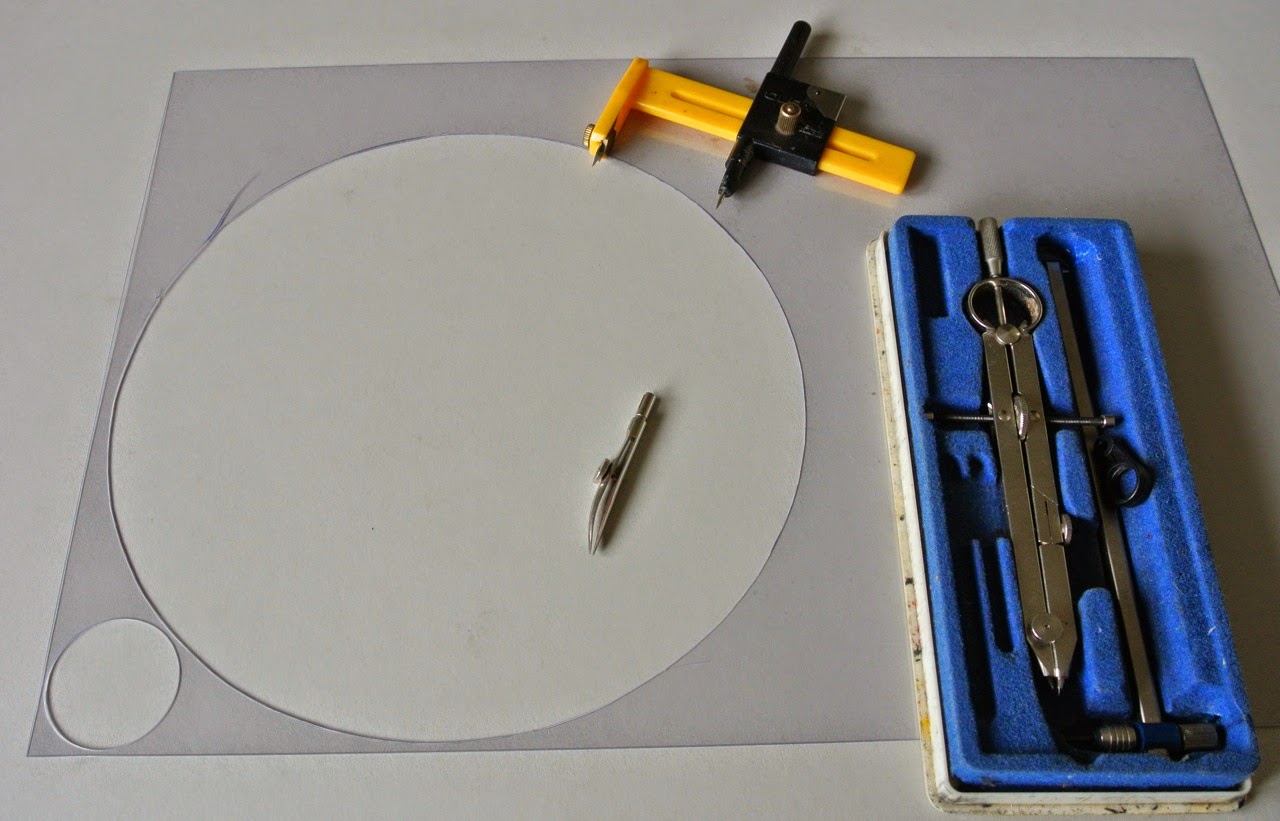 I decided to replace the kit rotors with some clear plastic. This thick acetate was picked up at an art supply shop and cost me about three dollars. The yellow and black object in the above photo is a circle cutter, a very useful bit of kit which was used to cut out the tail rotor. The main rotor was unfortunately too big for my little circle cutter. I drew around a plate from the kitchen with a Sharpie, then cut this out with a pair of scissors. In the centre can be seen a small attachment that fits into my compass and allows me to draw circles using paint. I used this to paint the red and yellow circles on the clear plastic using acrylic paint. 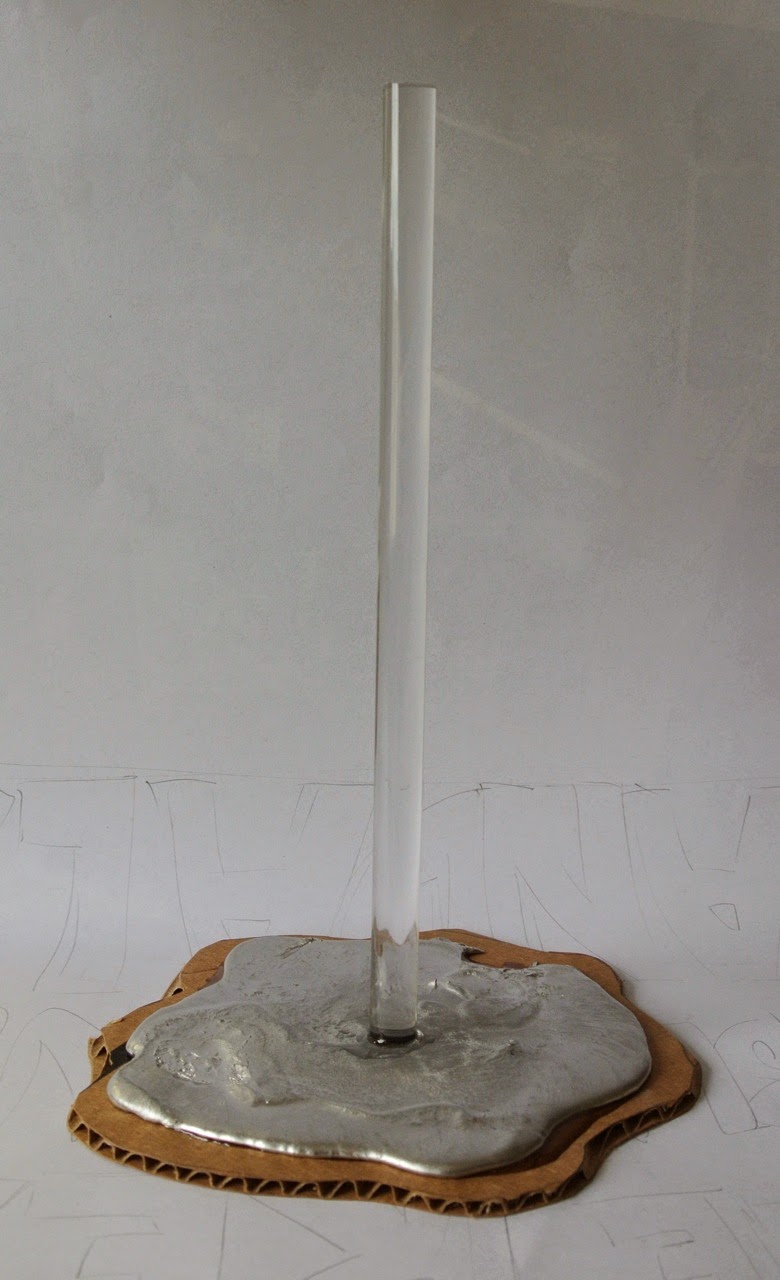 Here is the flight stand in its naked form.  A blob of white metal provides weight and is glued onto a  cardboard base. I had bought a few lengths of perspex rod for flight stands ages ago and here have finally put some of it to use. 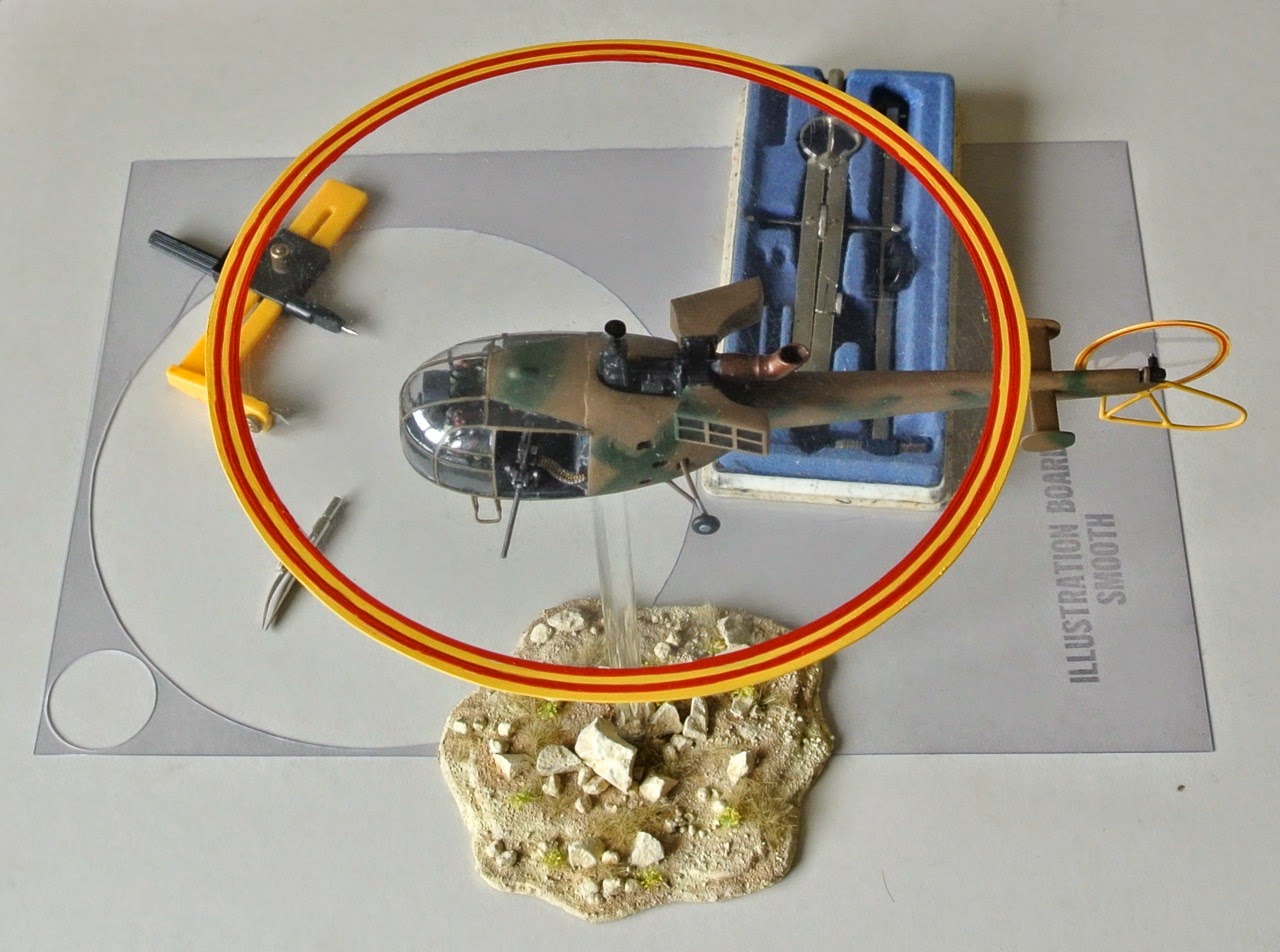 The yellow and red rotor effect brightens up the model. The base of the flight stand has had groundwork added. The model is finished! 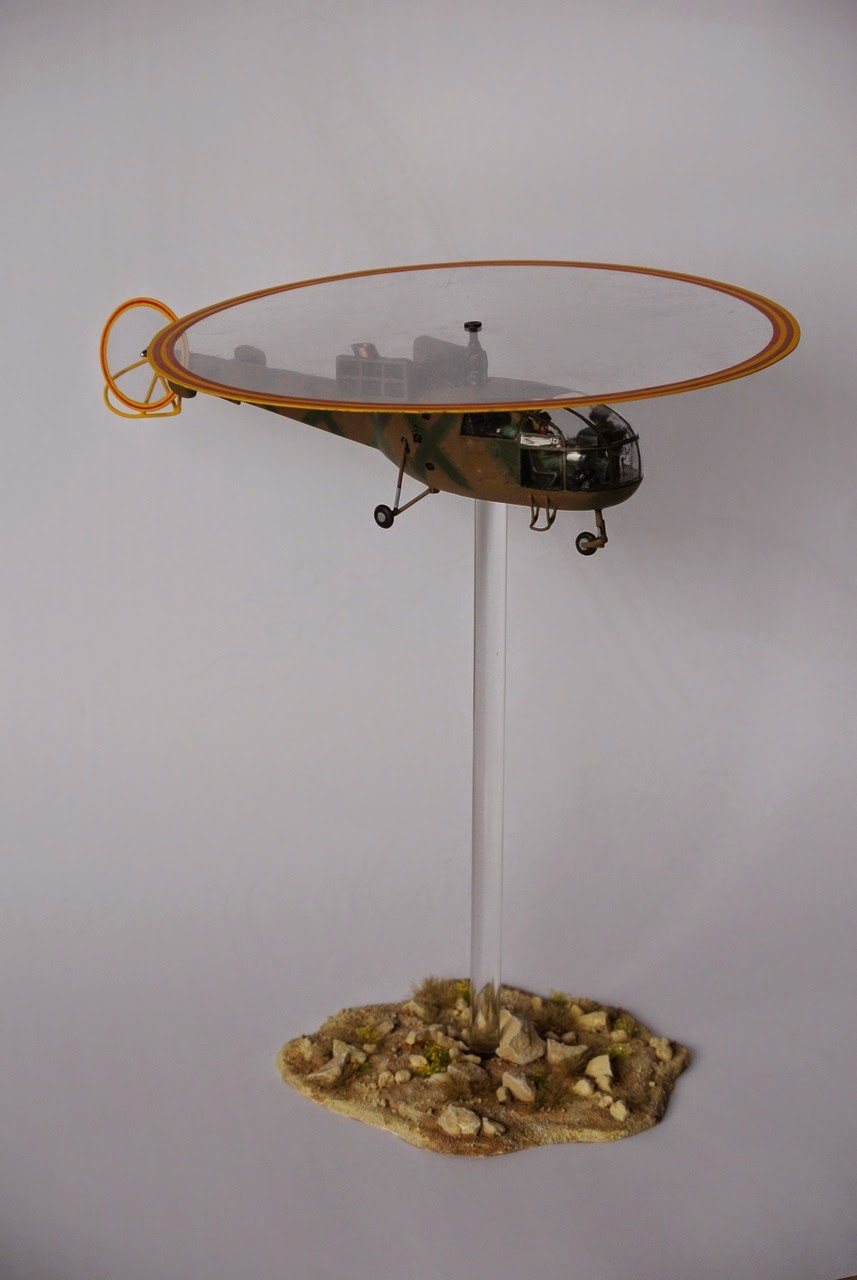 So there it is folks. I will tackle the G-car soon.
Please remember that breathing in resin dust is to be avoided. Always wear a dust filter mask and wet down your wet and dry/sandpaper when working with resin.
Safe and happy modelling to all.