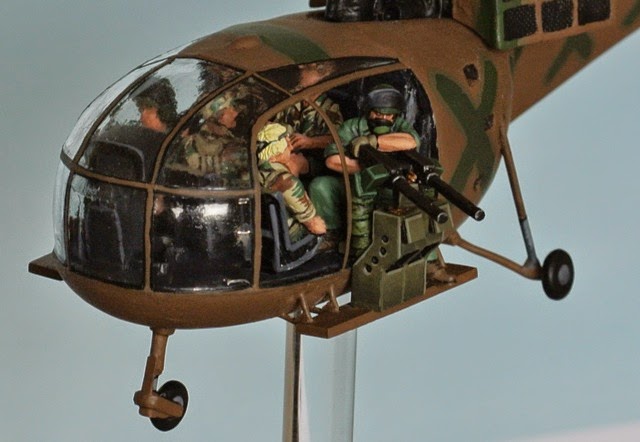 This time it's the Alouette G-Car in the spotlight, and just I did with the K-Car in this post I will highlight the steps needed the complete Eureka Miniatures' resin and white metal model.

The Alouette III helicopter was used by the armed forces of the state of Rhodesia during the Rhodesian Bush War. In its role as a gunship it was known as the K-Car, while as a troop transport it was called the G-Car. The Alouette G-Car could transport a stick of four soldiers and was armed with twin .30 cal machine-guns, making it a crucial element in Fireforce operations.

Readers may wish to  consult the post detailing the construction of the K-Car for steps that I've not covered in this one. 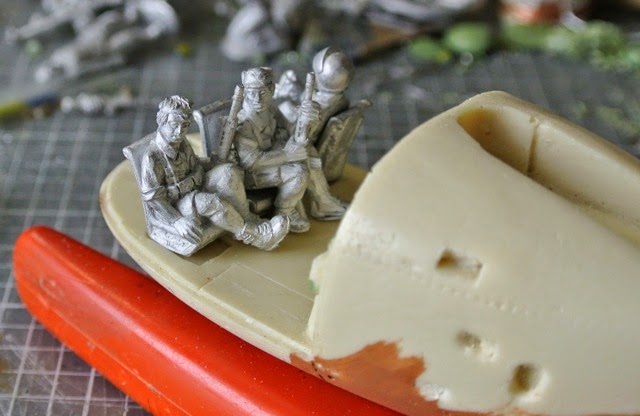 After cleaning up the fuselage casting, it's best to test fit seats and figures so that you are clear about where everything is located within the helicopter. Here's a shot of who goes where in the front row. Note how the two troopies are seated facing the back. Although G-Cars could have various seating arrangements, I've recreated what I believe is the most common layout. 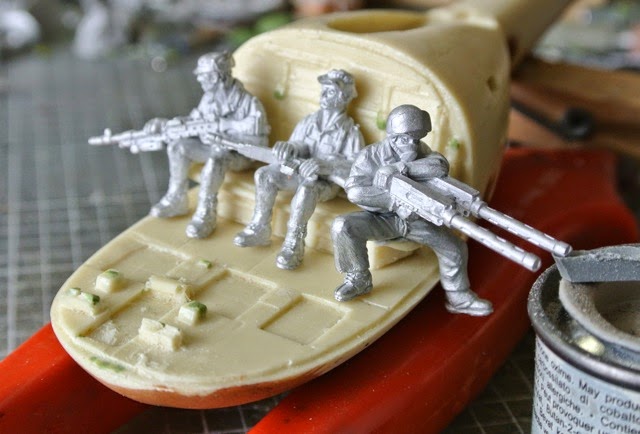 The back row and bench seat test fitted. Note the MAG gunner in the left of the photo. 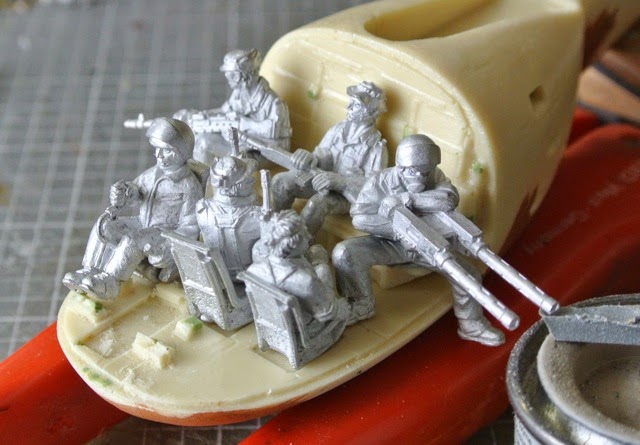 It's a little squeezy, but all the figures will fit comfortably inside. 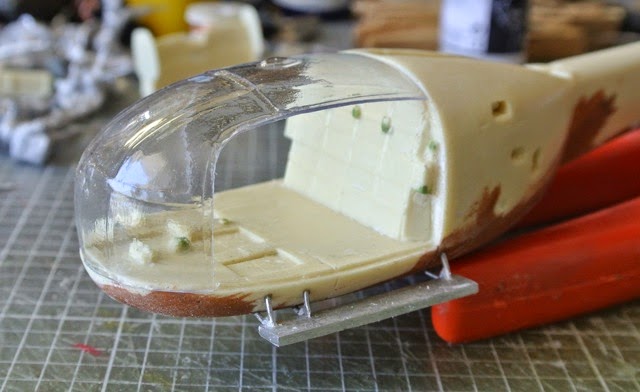 The clear canopy must be trimmed and then sanded to fit. I've removed the front door and the sliding door from the left side. 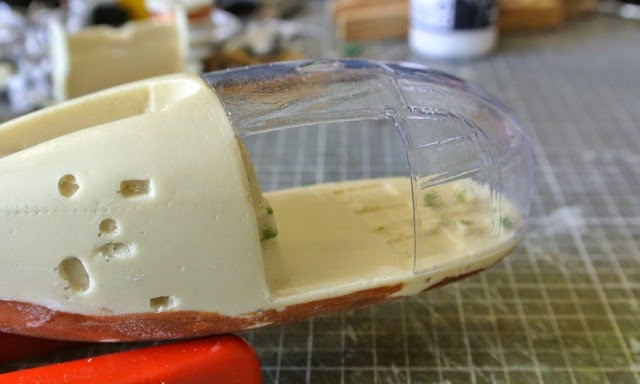 ....and on the right side just the sliding door is removed. It's important to do this now to ensure that internal fittings fit properly inside the crew compartment.

Once it's clear where everything goes, you can start gluing elements together. Start with the foot-rests on both sides of the crew cabin. 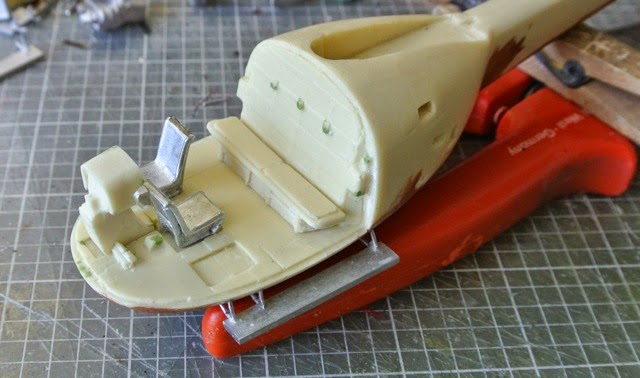 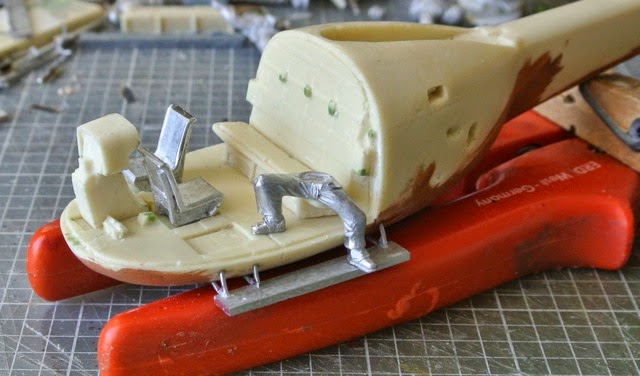 The easiest way to make sure the door gunner mates both with the seat and his guns is to glue his bottom half in place first. The figure sits on the edge of the bench and there is an indentation on his backside so it should be clear where to glue. 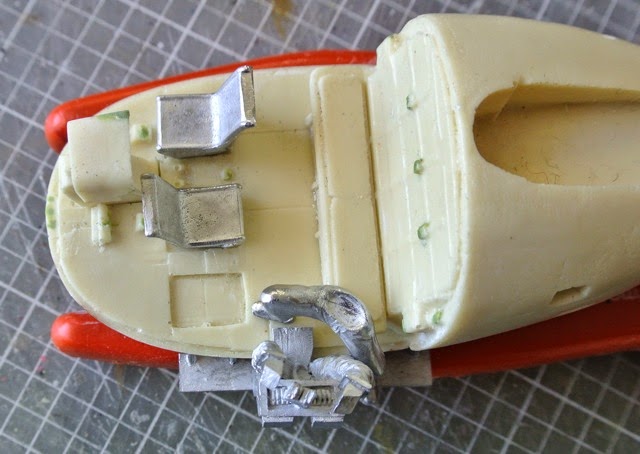 Here the ammo bin is test fitted. The back support of the ammo bin lines up with a scribed line on the floor of the crew compartment. The gunner's left foot should be on the foot-rest. 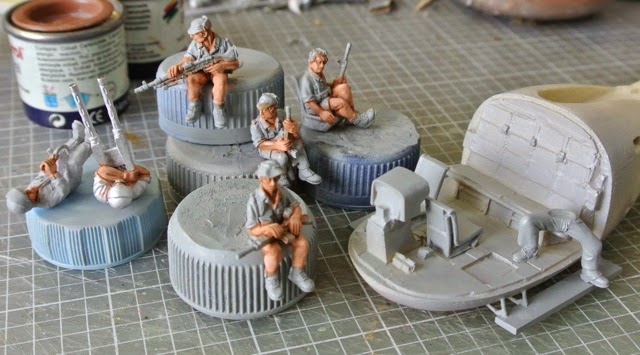 Crew compartment with elements in place are undercoated along with the figures and painting has begun. 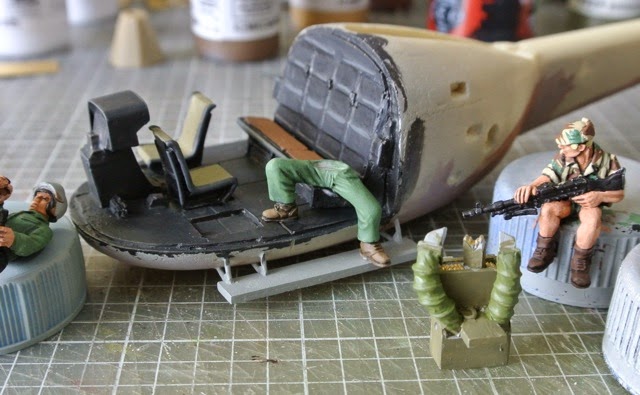 Interior is painted grey and dry-brushed with a light grey, seats as well as the disembodied legs are painted. Paint the rear of the ammo bin, and finish painting the rest of the figures. 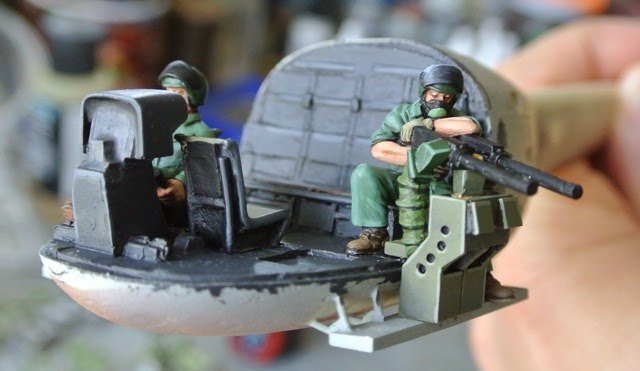 The gunner's upper half as well as the ammo bin are glued into place. I use a 5 minute epoxy for this, giving me time to ensure that everything is fitted together properly. The linked ammunition coming out of the top of the bin will fit snugly onto the insides of the guns.
You can glue the pilot in at this stage, too. 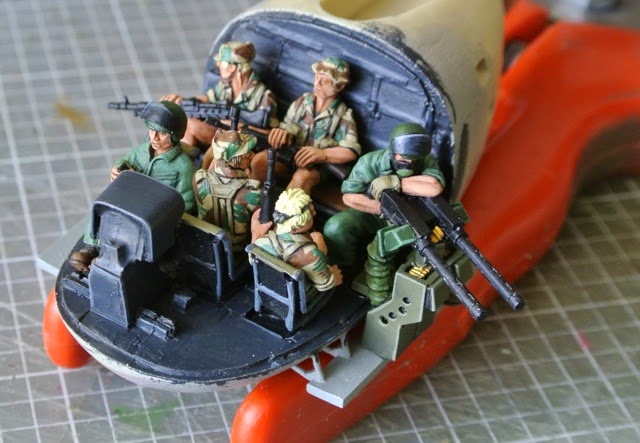 Once the gunner and pilot are in place, glue in the four-man stick. It's wise to test fit them with the canopy in place to make sure everything fits inside. 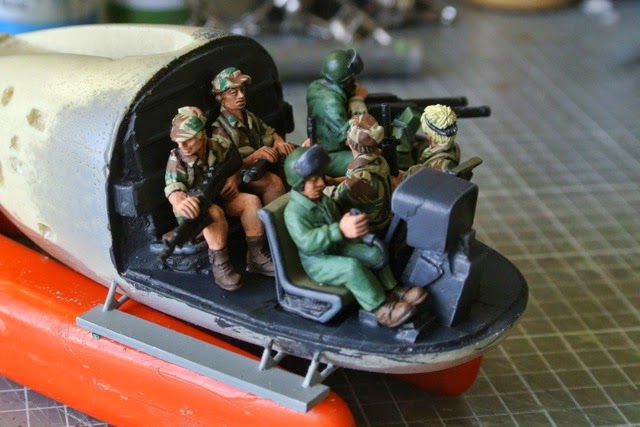 Here's the other side. 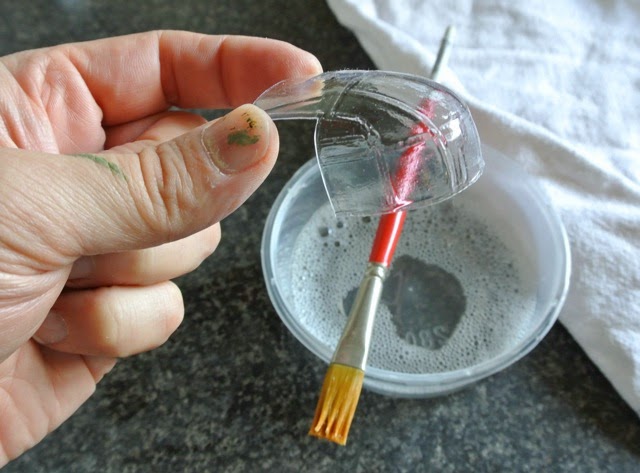 I gave the canopy a wash in some soapy water to remove any grease and dirt accumulated during sanding. 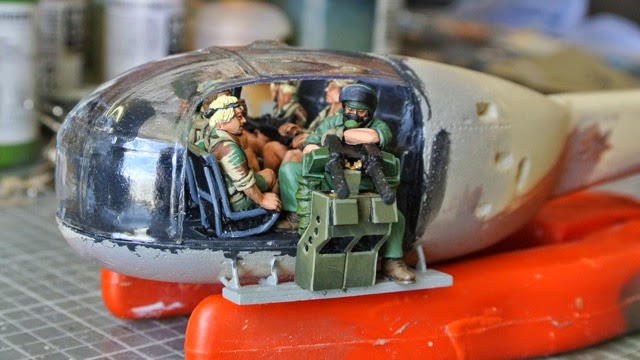 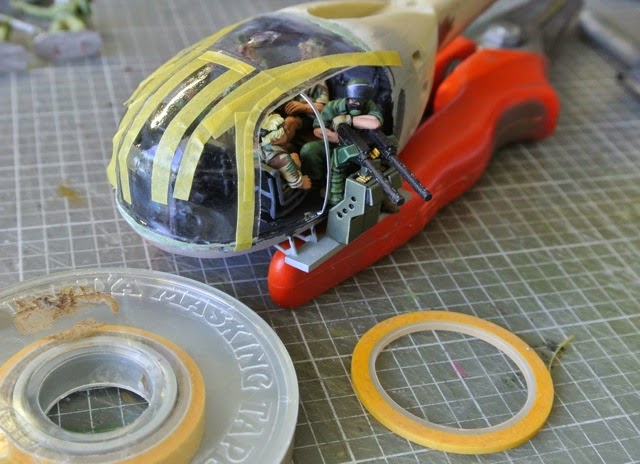 Masking tape from the hobby shop is once again used to paint the canopy framing. I've added the missing canopy frame with a thin piece of metal cut from a tin can lid. 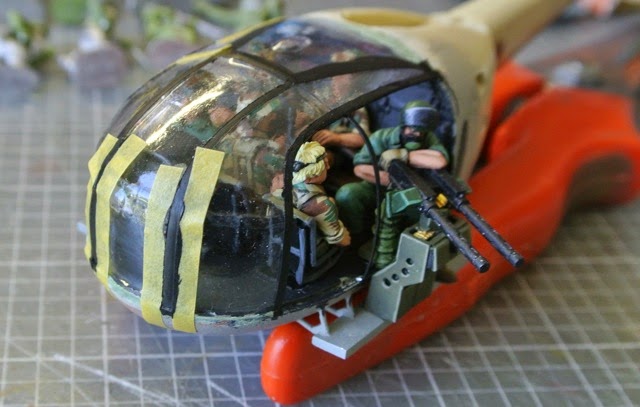 The masking ensures a much neater finish than hand painting. I used a Games Workshop acrylic black. 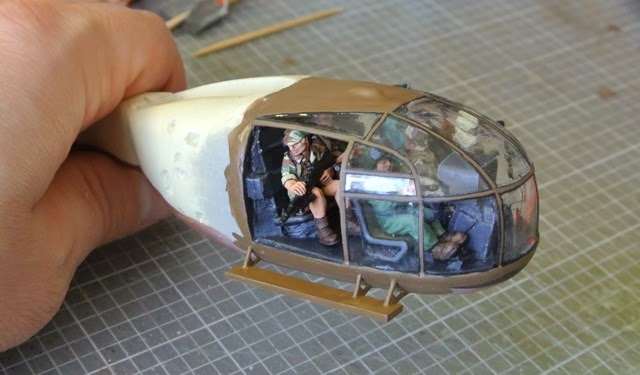 A thin line of brown is hand-painted within the black lines.

With the canopy painted I then glued on the wheels and other external elements. 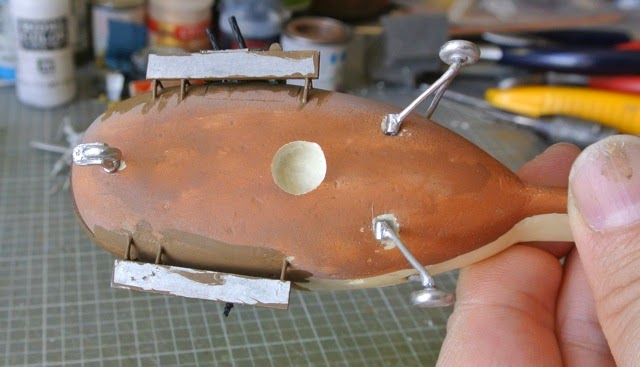 I bored a hole for the rod that I use as a flight stand. The ammo bin did not throw out the centre of balance, so the hole is along the centre line, just aft of the crew compartment. 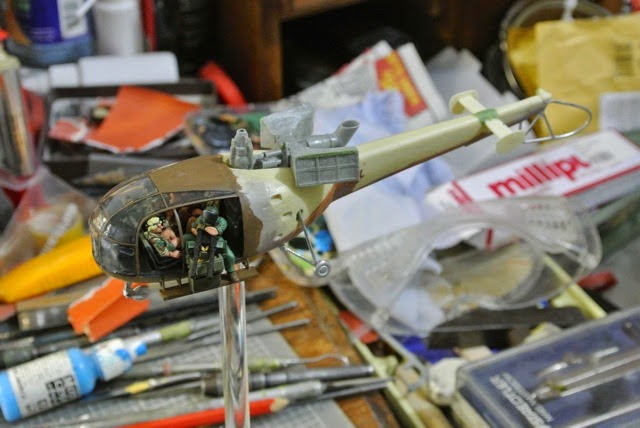 Some putty was used to smooth the join of the tail elements. 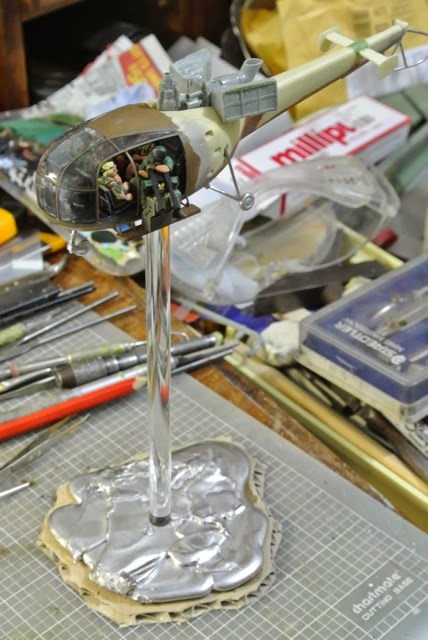 Here's the whole lot test fitted to the flight stand. 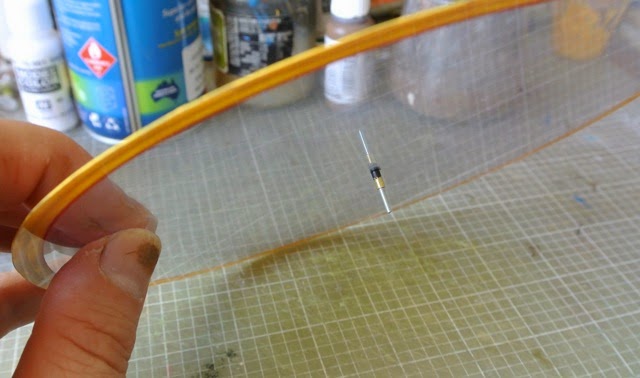 If you use the clear plastic rotor then a small collar is needed to raise it a little off the top of the rotor.
I've used a little piece of brass rod. You will also need a small nail or suchlike to hold the rotor onto the engine.

Camouflage paint has been applied and the rotor is on! The gunner looks pretty mean operating the twin MGs.

In constructing and painting these kits I've found that it's important to be methodical and take one step at a time. Things that fly are generally more tricky than tanks and AFVs to construct, but the end result is some impressive hardware.