While the previous post concerned a modelling project requiring tons of research and rivet-counting, this one ticks all the boxes of what scale modelling can also be about.
Part one is way back here, and below are the snaps, followed by some WIP shots and then a little info. 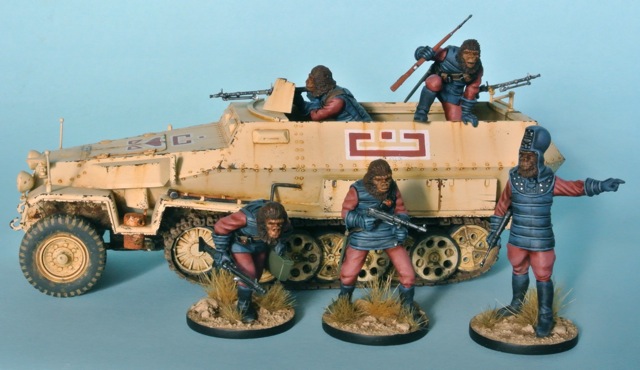 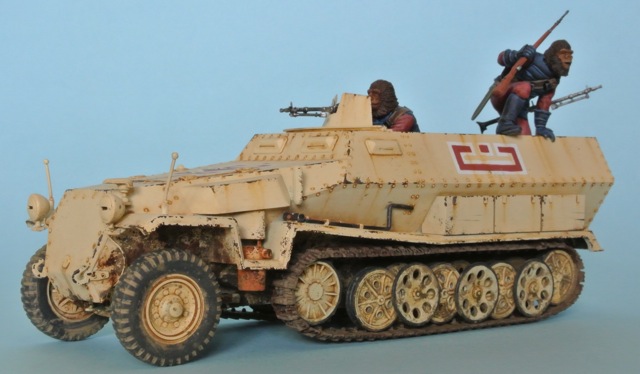 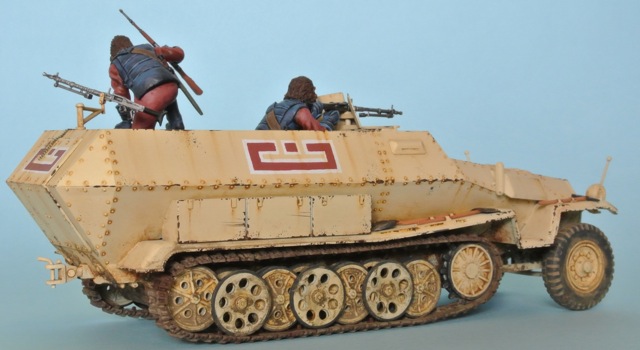 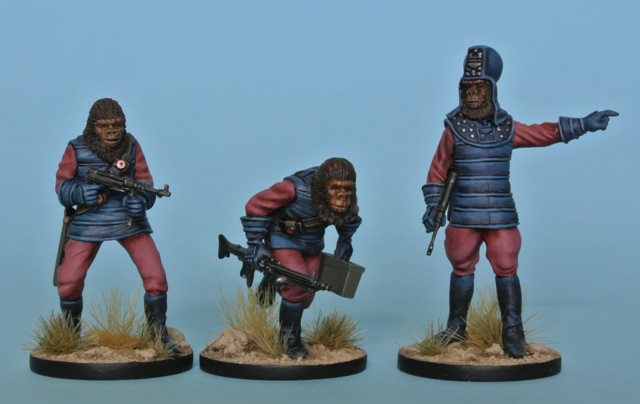 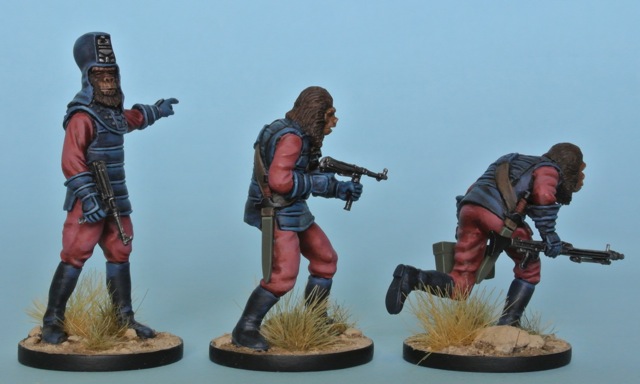 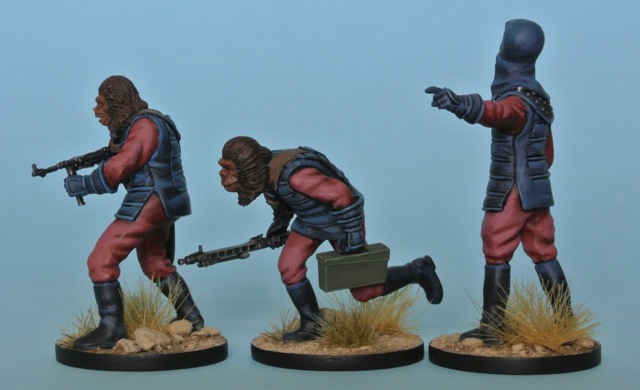 This is Tamiya's Sdkfz 251 halftrack, a kit from the early 1970's. These old kits are great for practicing new paints or painting techniques on, and with a little work can build into fine models. 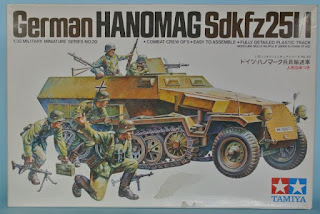 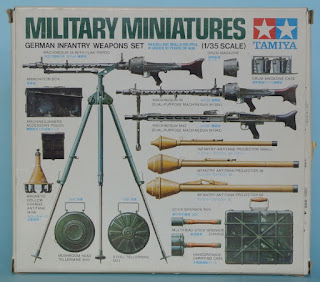 Some basic interior details were added, along with a little refinement of the headlights and width-indicators. The rear machine-gun mount is pretty toy-like, so a new one was built from scratch.
The MG's on the halftrack and most of the weapons for the figures were taken from Tamiya's old German Infantry Weapons Set. The set dates back to 1979, perfectly useful for a  project like this. 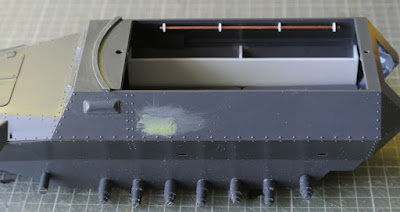 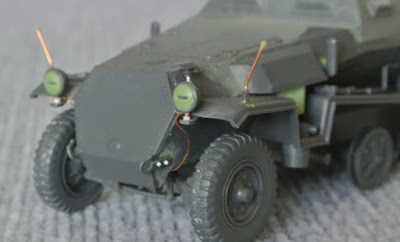 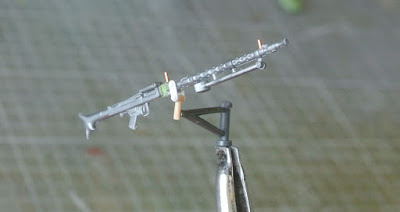 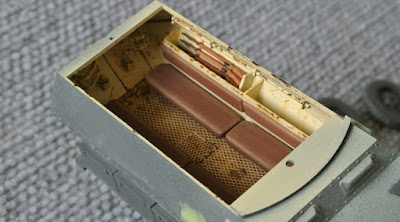 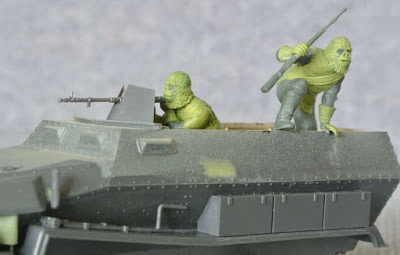 The figures are also vintage Tamiya, suitably converted.
These 1970's era figures are way too basic for serious modelling, and with so many excellent figures sets now available, they'd be piled up in my cupboard without purpose.

The dynamic poses are such fun, though, and so the idea of converting them to Planet of the Apes style gorilla soldiers was born. I spent a little extra time on the Gorilla General. 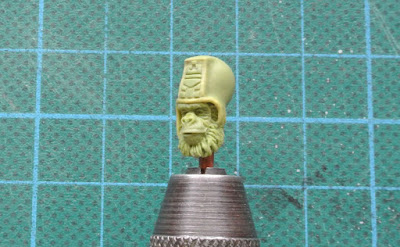 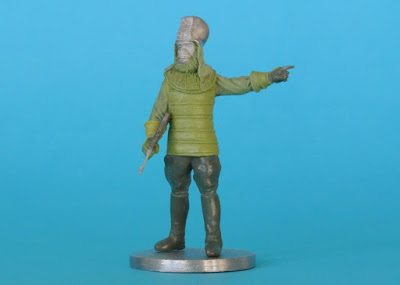 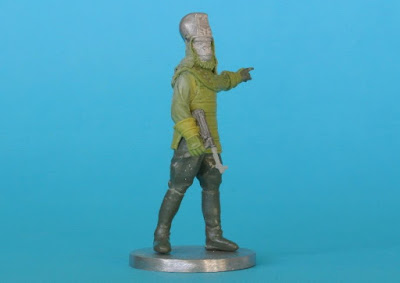 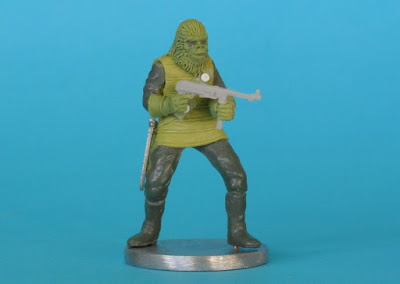 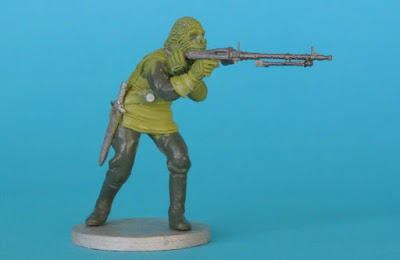 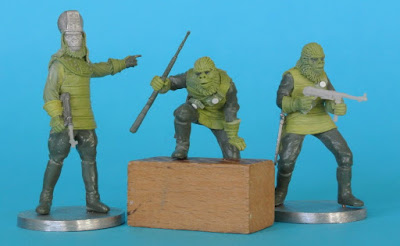 The colour is Desert Tan Base Surface Primer (73613) from Vallejo, over a rattle-can white base-coat. The ape glyphs were masked, then the red areas painted by hand. Chipping was applied with a dark grey acrylic, both with sponge and fine brush. I really overdid the chipping on the interior, but I'm pretty happy with the exterior chipping. Pin washes and streaks were done with oil paints. I had never used dry pigments before, so experimented with them around the lower hull and running gear.
That's what this project was all about - fun, experimentation, and putting old model kits to use!

I amped-up the colours on the ape uniforms, being inspired more by the Curtis/Marvel Planet of the Apes comics than by the original five films.

There is an excellent post here about the Newton Comics Planet of the Apes reprints, which were sold in Australia during the 1970's. These somewhat inferior reprints of the Curtis comics, with bodgie printing and stories cut off half way through, and printed out of sequence, were the ones I grew up with as a kid. 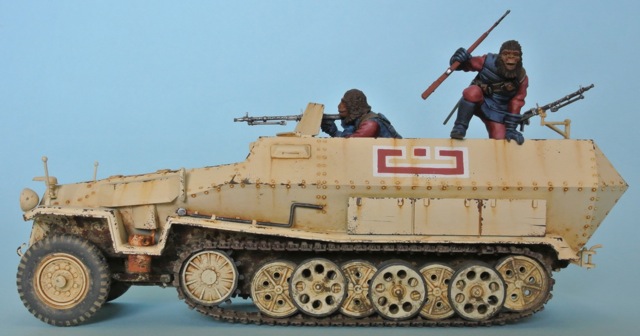 I entered the half-track (with figures) in the Sci-fi vehicles category, and the Gorilla General in the Sci-fi figures category at this years Australian Model Expo and was most pleased that they achieved a 'commended' award and second place respectively.