Following on from the rifle and sub machine-gun squads, here are some images of the new 28mm WW2 Soviet support weapons and teams that I recently finished sculpting for Eureka Miniatures.

First up is the PTRD 1941 anti-tank rifle with two-man crew. With a calibre of 14.5mm, the PTRD was a single shot bolt action weapon which was very widely distributed in the Red Army. 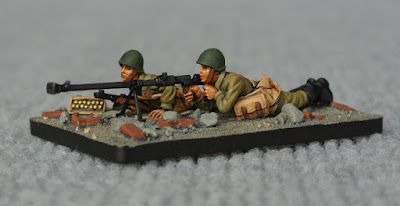 Next is the classic Maxim PM 1910 machine-gun also with two-man crew. Carried along on it's Sokolov wheeled mount and easily recognisable with it's fluted water jacket.

And finally there is the M1940 50mm mortar. This was one of a few different light mortar designs issued to infantry units of the Red Army.

...and here are all three teams together, plus a couple of the arcane reference books that came in handy while researching this project. I mean, what library would be complete without a copy of Know Your Antitank Rifles? 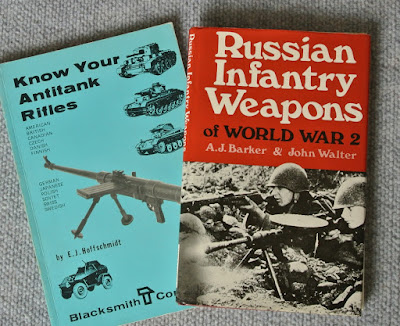 I'm on a bit of a roll with this whole WW2 Russian thing so you folks can expect this range to expand. I also have more post-2000 figures in the works too, and maybe even some scale modelling posts coming up.
Posted by Kosta Herko at 05:48 18 comments: