When Nic Robson asked if I was interested in sculpting a range of World War 2 Soviet troops to coincide with the Stalingrad mega-game that Mike Parker of Battlefield Accessories was putting on at Cancon, I jumped at the chance.

The sculpting and production of these four sets was unfortunately delayed (partly because I had to fight off a nasty man-flu at the end of last year) and in the end only a few squads of these miniatures made it onto the table at Cancon.

The game was a total blast and I was asked to step in as over-all Russian commander at the last minute. Despite my complete ignorance of the Chain of Command rule system I managed to organise the assets and players on the Soviet side and pretend that I knew what I was doing.

Here's an excellent AAR, and below a flyover of the crazy tables that the Battlefield Accessories guys put together. The buildings themselves are fantastic and the impact of the whole setup was impressive to say the least!

The below photos show a set each of the sub machine-gun squad (8 men) and the rifle squad (11 men). Both sets are available wearing either steel helmet or the pilotka sidecap. These are the display figures that I painted for the Eureka stand at Salute. All four sets are slated for release on the Eureka Miniatures website soon.

Mortars, Maxims and anti-tank rifles are in the works too. 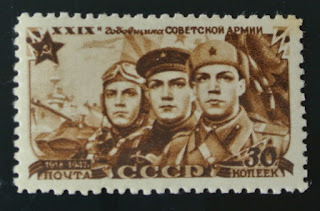